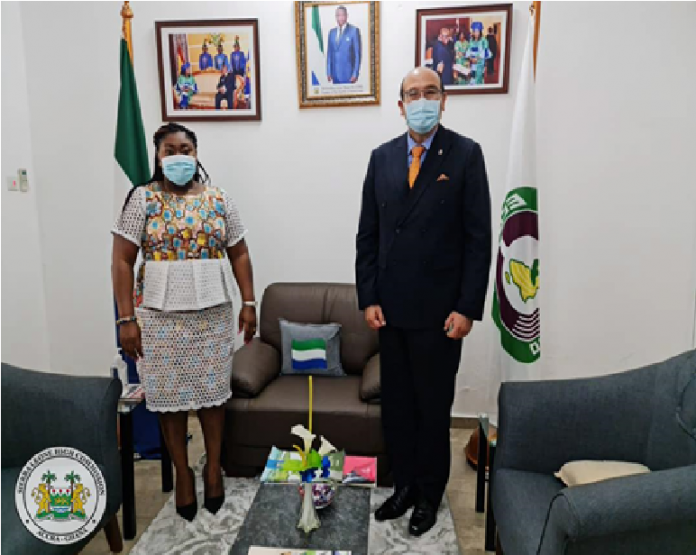 The Mexican Ambassador  to Ghana, accredited to Sierra Leone  H.E. Enrique Escorza has during a courtesy call on the Sierra Leone High Commissioner to Ghana, H.E. Francess Virginia Anderson expresses hope and optimism about working very closely with Sierra Leone to further and expand existing diplomatic ties between the two nations.

Speaking upon his arrival at the Sierra Leone High Commission’s office, Ambassador Escorza who is on his maiden tour as an Ambassador for his Country, described his call as one that is aimed at learning with humility and obedience, from High Commissioner Anderson with this tour being his first in Africa after completing a tour in China as a career Diplomat.

He said both countries had enjoyed diplomatic ties over the years and that with his new office, he will continue to uphold and strengthen it while prioritizing future partnership between the two countries.

Ambasador Escorza said he has heard lots of good things about High Commissioner Anderson which he believed can be practiced in the future so that he can succeed in his Mission on behalf of his country.

Having heard a lot about Sierra Leone and its high commissioner in Accra, Ghana, he said he is looking forward to be in the country and hopeful of working together with his colleague to foster development, while applauding the very good strides made by President Julius Maada Bio so far.

In her response, the Sierra Leone High Commissioner to Accra, Ghana, H.E. Francess Virginia Anderson thanked Ambassador Enrique Escorza for his visit and pledged her commitment and supports in fostering and strengthening both countries diplomatic relationship.

She added that as a colleague she is ready to support through diplomatic means and noted that they both will be learning from each other.

Sierra Leone and Mexico had established diplomatic relations many years ago. The country is accredited to Sierra Leone from its embassy in Accra, Ghana.