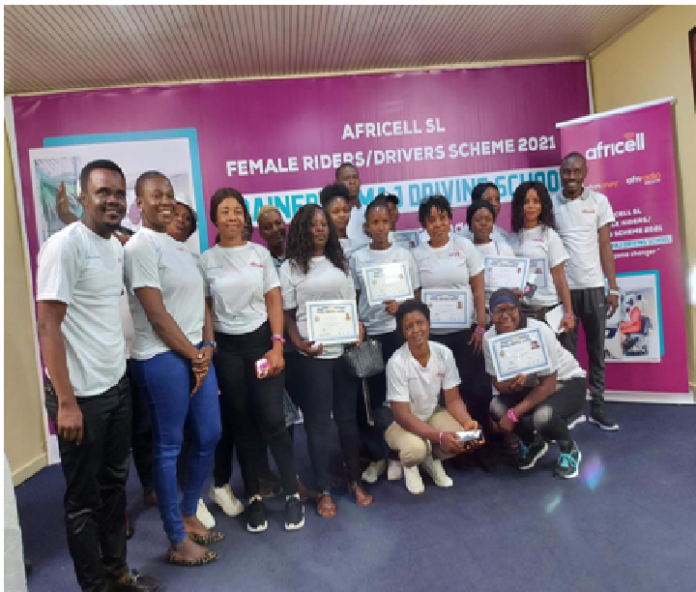 Africell Sierra Leone, in partnership with Mumaj Driving School, hasconcluded training for young Sierra Leonean women to becomeprofessional commercial tricycle/ Kehkeh riders and to contribute to theeconomic development of the country.
The training was designed to empower young ladies to take the ventureinto the male-dominated Kehkeh riding industry, with the goal ofreducing the high rate of unemployment among women, who constitute thegreater majority of the Sierra Leonean populace.

Speaking about the training program, Africell’s Human ResourceManager, Patricia Jangah, explained that the training is part of aninitiative titled: “Africell SL Female Riders/drivers Scheme”, whichshe said was launched by Africell in June this year to empower young
women in acquiring skills for self-reliance.Madam Jangah stated that Africell’s core value is to empower youngpeople, which was why the company launched the initiative.

“This first batch of training is a demonstration of our willingness toempower young people especially young women, as the second batch oftraining will follow soon, but it all depends on the performance andsuccess of those who we have already trained,” she stated.

Jangah went on to explain that for now, the company will not employ the trainees as permanent staff, but that they will be placed underthe company’s “outsource section” and due to their performance, theywill consider employing them as full-time staff. She urged the femaleriders to execute their duties professionally and to abide by alltraffic rules and regulations to avoid a confrontation with the law.

Mumaj Driving School’s Senior Instructor, Abu Bakarr Ibrahim, thankedAfricell for the partnership and thanked the graduands for goingthrough the process despite the difficulties. Mr Ibrahim explainedthat he was satisfied with the trainees and boasted that he couldrecommend them anywhere because they were well trained and disciplinedto carry out their daily activities.

Explaining the training process, Ibrahim stated that they trainedfourteen (14) young ladies and that the training was divided intotwo-stage, the first stage been the theory aspect, vis-a-vis basiccontrol of driving a vehicle and traffic rules in Sierra Leone. Hewent on to say that, the second aspect of the training was mainly aboutthe riding of Kehkeh. He assured Africell that the trainees would notdisappoint in executing their daily duty.

Giving the keynote address, Christiana Kai Kamara, a well-experiencedKehkeh rider, expressed her gratitude to Africell for the opportunity tobe self-reliant. She explained that what men can do women can dobetter, especially in the area of Kehkeh riding in the city, noting thatthe few female Kehkeh riders presently in the field were more careful
than their male counterparts.

Madam Kamara stated that the troubles they face as female Kehkeh ridersin the city were unbearable, noting that most time men tend towant to abuse her because of her gender. She further stated that shewas a trader hawking different types of items, but that since shestarted riding Kehkeh, life had become much better for her. According toher, she can now take care of herself well and support other membersof her family and at the same time contribute to the development ofthe country.

Madam Kamara urged the trainees to ride carefully and to always stayfocused. “Riding in the city involves patience and good manners” toavoid road accidents, she said.

Each trainee received a certificate attesting to their completion ofthe training.