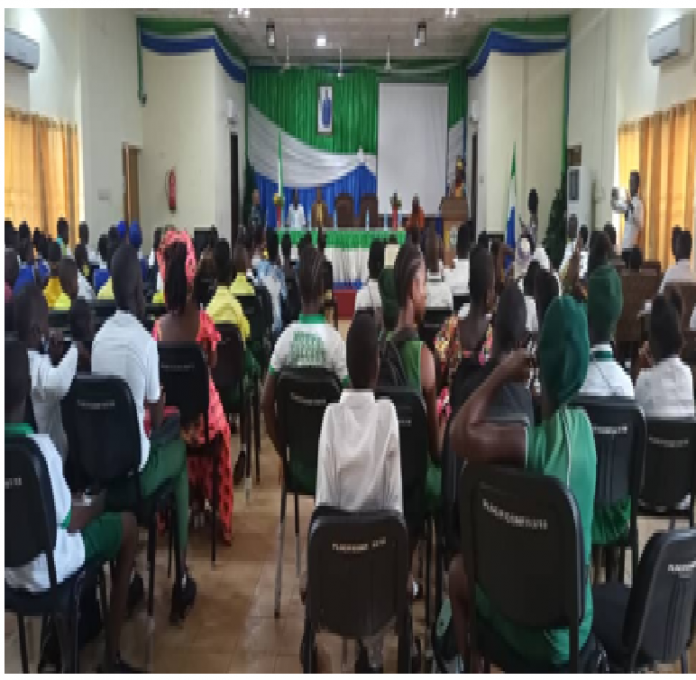 In observance of the International Day of the African Child, the North West Regional Office of the Anti-Corruption Commission on Wednesday 16th June 2021, held a seminar for School Integrity Club members on the theme: ‘Cultivating the Culture of Integrity in Schools’ at the Port Loko District Council Conference Hall.

The seminar was organized to raise awareness on key corruption issues in the education sector and to also imbibe the virtues and values of integrity on secondary school pupils. Speaking at the occasion, ACC Regional Manager, Al-Hassan Sesay underscored the significance of quality education to the country’s socio-economic development. He accentuated the need to uphold academic integrity and to ensure that the future generation of the state was well nurtured with a mindset of standing against Corruption. As a reflection on the ills and vices that took place in Apartheid Soweto, South Africa, Mr Sesay appealed to all to exert same energy to garner support to combat key corruption issues in the school system. “Use your energy and voice to stand against and resist illegal charges and examination malpractices in your respective schools” he urged the pupils.

Delivering her keynote address, the Guest Speaker HawaCoomber, Deputy Chief Administrator, Port Loko District Council, said it was now evident to all citizens that the values and hallmark of integrity, discipline and excellence that characterized Sierra Leone’s educational system has been consistently eroded over the years to the brink of collapse.  She further stated that the Free Quality Education can only thrive in a teaching environment that upholds  integrity which requires a multilevel intervention to promoting academic honesty, and creating a culture of diligent independence in learning, integrity in schools and developing a vision of recouping the then Athens of West Africa. She pointed out that no nation can progress without Integrity ensured, and noted that education stakeholders must demonstrate a sense of purpose and commitment to restoring the acclaimed “Athens of West Africa.”

Explaining the purpose of the meeting, Senior Public Education Officer, Samuel JunisaSankoh reminiscence the Apartheid Soweto massacre on the 16th of June, 1976 (45 years ago) when pupils / students became infuriated and hurt as a result of being taught in German Afrikaan language which didn’t resonate with their historic nativity. He pointed out that the 6-3-3-4 system of education which coincides with the Free Quality Education have created space for  leveraging enhanced education sector. JunisaSankoh emphasized the synergy between the schools / colleges and the Ministry of Basic and Senior Secondary School (MBSSE), then the Anti-Corruption Commission (ACC)

Earlier in his welcome address, the Public Education Officer Mohamed Thullah said the seminar zeroed in on a spectrum of exciting and benefitting themes that discuss the aspects of integrity in our school system. “As we reflect deep on the adverse effects of corruption in schools, school administrators are expected to serve as integrity mentors and to help the pupils in their various schools to achieve their fullest potential in life. Providing a child with high-quality education transfers knowledge, instills confidence, and breaks down barriers to opportunity for that child.” he said.

In his brief statement as Honorary Guest, the Deputy Director of the Ministry of Basic and Senior Secondary Education (MBSSE) FodayKonteh applauded the efforts of the ACC for undertaking several activities and interventions to bring sanity to the sector and for particularly building a sense of Integrity on the minds of pupils. He described the event as timely and called on school administrators to desist from corrupt practices and conform to best practices and guidelines of the Ministry. He pointed out that government has made huge investment on the sector to enhance access and quality and for the overall improvement of the standards of education across the country.