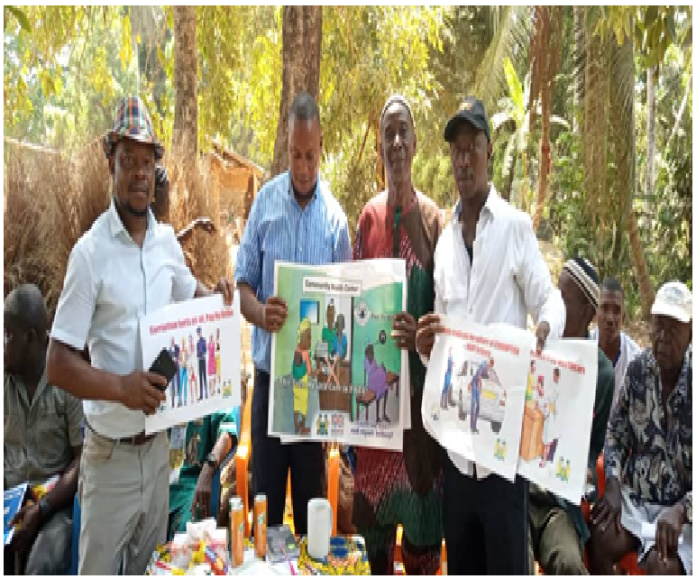 The Regional Manager of the Anti-Corruption Commission (ACC) in the North-West Region, Al-Hassan Sesay has urged local authorities and residents of Mapotoloh Community to own the fight and report corruption incidences in their various localities.

He made this call during a sensitization meeting with community leaders and residents on Thursday 25th March 2021 in Mapotoloh. Mapotoloh is one of the border communities in Samu Chiefdom in Kambia District with several crossing points to neighbouring Guinea.

Speaking at the meeting, Regional Manager Al-Hassan Sesay described corruption as the biggest barrier to attaining economic growth, peace and prosperity and as such requires the needed political will, resilience and the knack to garner national embrace in mitigating the scourge of corruption. He went on to state that corrupt practices range from petty corruption whereby bribes are required before normal bureaucratic procedures are accomplished, to large scale corruption whereby considerable sums of money are paid in return  for preferential treatment  or access to a particular service.

Explaining key Corruption demands, Mr Sesay said corrupt practices include but not limited to bribery,  smuggling,  illegal  payments, falsification  of  documents, forgery,  concealment and misuse of royalties and donations for communities, aiding  and  abetting of  any  kind  to the  detriment of another person, community, society or pilfering from the national purse as well as  the deliberate attempt to circumvent rules and process.

In his submission on the need for concerted effort in the fight against graft, Manager Sesay made a comprehensible explanation on corrupt practices prevalent in local court administration, public schools system, the health sector, security including the Sierra Leone Police and the Military and other areas of concerns of corruption opportunities in underserved and unserved communities across the country.

With specific reference to corruption demands at checkpoints enroute to Mapotoloh community, he highlighted several corrupt practices but not limited to issue of bail in police stations, senior officers enforcing a perverse system of returns in which rank and file officers are compelled to pay up the chain of command a share of the money they extort from the public, failure by senior management to take the necessary action thereby reinforcing impunity for police and military officers of all ranks to perpetrate crimes against citizens they are mandated to protect among other things.

Explaining the purpose of the meeting, the Public Education Officer Mohamed Thullah who also doubles as chairman of the occasion said the community meeting was conducted to provide a platform where in the community will be educated on the general work of the Commission, the effects of corruption and the need for collaboration in winning the fight against corruption. He stated that corruption has permeated every aspect of society which has made public support as pivotal in addressing it. In reporting corruption, he said, confidentiality and the protection of complainants and witnesses occupies an integral part in terms of safeguarding their security and safety.

The Senior Public Education Officer Samuel Junisa Sankoh underscored the significance of community ownership and support to the fight against corruption and encouraged local authorities and residents to resist and report all forms of corruption to the ACC. “You must rise to the occasion and make your voice heard by reporting corruption,” he emphasized. He also explained various reporting mechanisms available at the ACC.