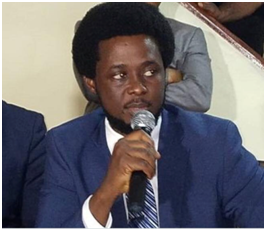 At this year’s West Africa Leadership Summit, Sierra Leone’s Anti-Corruption Chief, Francis Ben Kaifala Esq. was conferred as a Fellow of the Chartered Institute of Management and Leadership in Lagos, Nigeria.

This prestigious laurel conferred on the ACC Boss, is in recognition of his exemplary management and leadership, demonstrable achievements, unmatched competence and unsparing drive to curb graft.

The Chartered Institute of Management and Leadership (CIML) is an esteemed internationally recognized body that seeks to instill a driving force that equips individuals with showing prospects, brilliantly innovative ideas and the urging drive that will be usefully relevant in both public and private sectors, and meet managerial standards within the global space.

The institute, since its inception, has helped in developing a broadly based education in management skills with a rich and diversified series of programmes that range from individual courses to professional appointment, with ethics, integrity and professionalism at its core.

The ACC Commissioner holds a Bachelor of Laws (LLB), from Fourah Bay College USL, an LLM in Law and Economics from the Queen Mary University of London, an LLM in Constitutional Law, Administrative Law &International Human Rights Law, from the University of Texas at Austin, United States of America. The under-40 year old ACC chief who is now a fellow of the CIML, Kentucky, United States of America, was appointed in 2018 by His Excellency Brigadier (Rtd.) Dr. Julius Maada Bio to head the country’s anti-graft agency. His impressive leadership track records and special affinity; to undauntedly change the sickening narratives, has proven to be the impetus for the unimaginable successes he has registered since his appointment.

This has corresponded with the country experiencing an unprecedented progress in the fight against corruption, corroborated by a steady upward mobility in every statistics and index-both nationally and internationally- since his appointment. Currently, Sierra Leone is ranked 117 in the Transparency International Corruption Perception Index, which is 13 places up from where the country was before Mr. Kaifala took over.

The Millennium Challenge Corporation Scorecard, where the country was rated 49 percent in the area of ‘Control of Corruption’ in 2017 currently rates the country a remarkable 81 percent.

Notably, all these achievements have contributed to a change in perception, according to the details of the Afro-Barometer Survey Report, which indicates that corruption prevalence in the country have drastically reduced from 70 percent in 2017, the year before he took over the reign  of the fight against corruption, to 40 percent in 2020.

Mr. Kaifala’s transformative revolutionary leadership has made corruption “a high risk and low income venture”. Various sections of the Anti-Corruption Act of 2008 were accordingly amended in 2019 making corruption a very expensive enterprise. This is in addition to the creation of the Special Anti-Corruption Division within the High Court of Sierra Leone to expedite the trial of corruption matters.

With all this fertile ground for the fight againstcorruption, Mr. Kaifala has led a team of crusaders that has helped the Commission recover over Thirty Billion Leones from corrupt persons since he took over the leadership of the ACC.

I believe the overwhelming accolades and laurels that have been conferred on Mr. Kaifala and the ACC since 2018, did not come as a surprise to well-meaning Sierra Leoneans.

What makes these feats more rewarding is the fact that they did not come on a silver platter. They are normally awarded after thorough scrutiny on the work and contributions of hundreds of prospective applicants and awardees.

Like, the International Anti-Corruption Champion award conferred on Mr. Kaifala by the US Government; like the rigorous electioneering process of electing a member for the African Union Advisory Board on Corruption; Mr Kaifala has always triumphed in all of these highly credible and independent scrutiny. And in all of these, he just can’t stop winning!

Francis Ben Kaifala, the people of Sierra Leone- especially the young ones- are proud of you. We thank you for representing us very well.