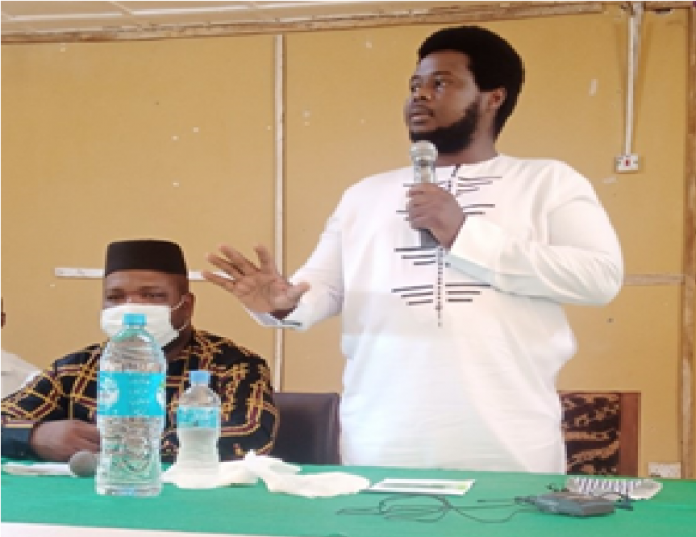 Across the Great and Little Scarcies rivers in Sierra Leone, the Commissioner of the Anti-Corruption Commission (ACC), Francis Ben Kaifala Esq, in continuation of his ‘Meet the People’s Tour, held an interactive Town Hall meeting with community stakeholders  at the Kambia District Council Hall, in Kambia Town.

Welcoming the ACC Commissioner and team, Dr. Nabieu Y. Yillah who represented the Paramount Chief of Magbema Chiefdom, said “with Ben Kaifala at the helm of the fight against corruption”…he is hopeful that Sierra Leone will rise again.”  Dr Yillah further stated that ever since the establishment of the ACC, this is the first time a Commissioner is paying an official visit to them. He concluded by thanking the Commissioner for his relentless pursuit of laundering the image of Sierra Leone both locally and internationally.

In his address to the people of Kambia, the Commissioner Francis Ben Kaifala Esq., reminded his audience on the ‘Servant Leadership Principle’. He said, a leader who does not ask for feedbacks from the people he is serving is not a good leader. Commissioner Francis Ben Kaifala also said “There is no negative or bad feedback, it depends on what you do with the feedback”.

The young  and astute anti-graft fighter spoke on the efforts made so far in the fight, coupled with the collective successes and the challenges in the fight against corruption.

He emphasized on the strategic location of Kambia when it comes to the transportation of people, goods and services within and without Sierra Leone. He implored Heads of Ministries, Departments and Agencies to embark on vigorous public education and sensitization programs in a bid to keep citizens abreast with their operations and activities.

Commissioner Kaifala furthered that, a lot has and continue to happen positively in regard the fight, but there is a whole lot of misconceptions on social media platforms on ACC’s work.

He said prior to his assumption of office in June 2018, the fight against corruption targeted and focused on persons, leaving their loots and pockets. He said hitting the pockets of the corrupt is the way to go in the new anti-graft strategy, as it is evident in the non-conviction based asset recovery approach leading to the recovery of stolen public funds totaling over Thirty Billion Leones.

In his statement on behalf of the Chairman, Kambia District Council, Chief Administrator, Dr. Edward Alpha registered Council’s appreciation to the ACC for the remarkable gains made in the fight particularly the new strategy employed to engage the people through Town Hall meetings championed by the Commissioner. He assured all present that with collective and concerted efforts the fight against corruption will be won.

Civil Society representative Kambia, Gibril Gortor thanked the ACC Commissioner and team for the visit. He drew the attention of the Commissioner to the potency of ACC’s sting operations and asked that the Commission turns its arrows to Kambia. Similar sentiments were expressed by James Sowa, District SLAJ Representative.

Earlier, the District Coordinator DICOVERC, Mustapha Mohamed Dumbuya, advised Sierra Leoneans to remain vigilant and use their face masks properly as COVID 19 was still around. He informed listeners of the availability of the COVID vaccine and that His Excellency President Brigadier (Rtd.) Dr. Julius Maada Bio and top Government officials have been vaccinated, assuring that it was very safe.

Questions and answers which were responded to by Commissioner Kaifala formed part of the interactive engagement.

The Commissioner and  team will continue the engagement in Koidu City, Kono District on Friday 19th March 2021, which will mark the end of the Commissioner’s “Meet the people’s tour” in the North-West, North-East and Kono regions.