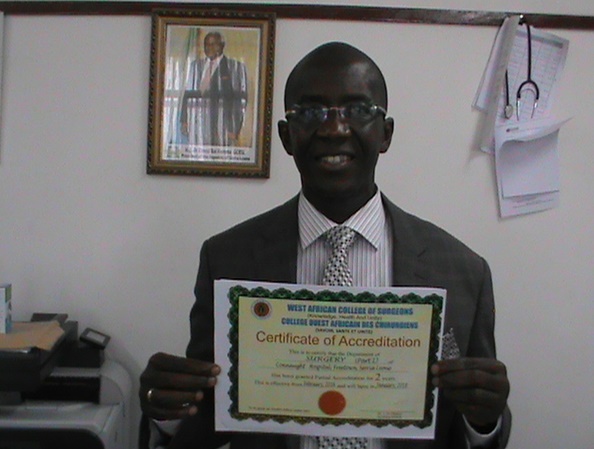 Delivering his keynote address at the Graduation and Prize-giving ceremony of Professional State Certified Midwives Set 31 of the National School of Midwifery held at the Miatta Conference Centre in Freetown on Friday March 31, 2017, Dr. Fofanah reminded the graduates that considerations for personal gains do not get the better of them and come between them and their patient to become great, unless they uphold the ethics and code of practice of the profession.

He said receiving them, he is optimistic with the assurance of having the health care system of the country with what he referred to as an infusion of new blood that would satisfy many more patients seeking care. “I am inspired by the graduation that we have prepared another new generation of nurses and midwives.

The Minister assured his audience that the Directorate of Nursing and Midwifery, the Nurses and Midwives Board, and the Nursing and Midwifery Schools are all working in close collaboration, taking concrete steps in institutionalizing career path development in partnership with the Human Resource Management Office and the Public Service Commission.

This, the Minister said, is to move away from the current system of promotion base from the length of service to a more progressive system that looks on performance and credibility.

He reiterated government’s willingness to providing a conducive working environment, disclosing that as a first step, cabinet has approved the transformation of the Nurses and Midwives Board to a full fledge Council in line with best practices and all that it takes for posterity.

Dr. Fofanah reminded the graduates that they chose the National School of Midwifery, an institute that has established a long tradition of success, and encouraged them to behave honorably in their duties, practice professionally, and to be kind to patients and expectant mothers, he referred to as vulnerable people.

The Minister described the rural area as the place with the greatest health needs, where they are expected to improve their skills, as well as making the required difference to the lives of expectant mothers, children and ill adults, adding that the Ministry is aware of the constraints in the execution of their duties: non absorption, delays on promotions, delays in effecting salary changes from one grade to the other among other key challenges.

He disclosed plans in working on a new Bill to strengthen the Health Service Commission to speedily, facilitate the adsorption and promotion of health workers, hoping that these Regulatory Amendments alongside a Revised Health Workers Scheme of service would unlock some of the difficulties they face.

Dr. Fofanah further disclosed plan to establish two additional Midwifery schools, one in Kenema and another in Bo, covering the east and south, hoping that these additional developments will open up more opportunities for training and ease the transportation and other living cost burden for those residing in those areas.

Bringing down the curtain, the Minister on behalf of the Ministry launched the MOHS Prize-Institutional 300 US Dollar Award for punctuality in the Labour Room, and congratulated the graduates on their success, and thanked the development partners and all those who in diverse ways provide support to the programme.

Giving the School’s Report, the Principal, National School of Midwifery, Dr. Joan Hannah Shepherd said every year, millions of women and newborns around the world are cared for by skilled midwives, adding that every day, thousands of babies are born, mothers are taken care of and lives are saved by midwives.

She said 44 professional State Registered Nurses (SRN) Midwives started their Midwifery training in August 2015, they lost one student last year and two of them deferred their training due to health and family issues, adding that 41 remaining successfully completed the State Board exams and graduated with a 100 percent pass rate. She added that 47 student Midwives are now in their mid-training block, adding that advertisement for the next intake for 2017 is currently out, and prospective students have started applying.

Dr. Shepherd informed her audience that the Ministry of Health continues its support to the National School of Midwifery through provision of staff and government grant, adding that UNFPA continues to be the main partner providing support for the training of Midwives with at least 90 percent of the school’s activities implemented through UNFPA’s support.

Making his remarks, the UNFPA Country Representative, Dr. Kim Dickson noted that the country had only 95 Midwives in 2010 when the Free Health Care was launched, and needed at that time 300 by 2013.

She said it is gratifying to note that under the UNFPA Midwifery sponsored project, the Ministry of Health is now the proud recipient of over 436 trained Midwives from both the Freetown and Makeni Midwifery Schools, and now with the 41 newly trained Midwives the country can boast of 477 certified trained State Midwives.

She disclosed that rehabilitating and refurbishing of the two schools with teaching and learning materials, desk, internet connectivity and administrative support, procurement of Infection, Prevention and Control (IPC) materials, review of the school curriculum, supporting tutors and  training to enhance clinical education, transfer of skills, improve supervision, monitoring and mentoring among others are part of their support.

Dr. Dickson observed that despite their critical role, Midwives in Sierra Leone often work in difficult conditions in rural areas, leaving their families behind in towns and cities, and expressed the need for other partners to assist the government and UNFPA with a view to improving their working conditions in rural communities.

She reaffirmed UNFPA’s commitment to supporting the education, training and regulation of Midwives in Sierra Leone and its continued collaboration with the Ministry to strengthen Midwifery services and care in the country.

The Permanent Secretary and Chairman for the occasion, Mr. David Banya on behalf of the Ministry recognizes the invaluable role of the Principal and staff of the school for making sure that with support from government and UNFPA, the number of midwives keeps increasing steadily.

He said midwives are cardinal to midwifery care and can make enormous contributions to the health of mothers and their newborn children. He added that midwives have a pivotal role to play in achieving Sustainable Development Goals 4 and 5: decreasing the death of children and increasing maternal health.

Commissioning of the newly qualified Midwives, distribution of certificates, special prizes and awards, and a skit by student Midwives Set 32 formed high point of the ceremony.