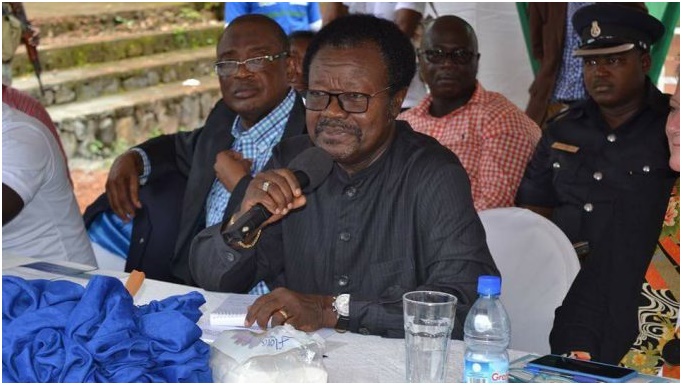 He said the Government is aware of the grave consequences of deforestation on the environment and the need to be committed to not only preventing, but also reversing the damage already caused by embarking on systematic reforestation.

Vice President Foh affirmed that, protecting the environment is a key commitment of the Government of President Dr. Ernest Bai Koroma. He further noted that, recent efforts by the Environmental Protection Agency, National Protected Area Authority, Ministry of Lands, Country Planning and the Environment, Ministry of Agriculture, Forestry and Food Security and other related Ministries, Departments and Agencies are directed towards protecting and managing the environment in ways and means that would be beneficial to humanity. The Tree Planting programme, he affirmed, is certainly one such useful and rewarding venture.

Vice President Foh expressed his delight at being part of the engagement , further stating that the programme reinforces Government’s commitment on sound environmental management to the people of Sierra Leone and the whole world at large.

He recalled that, Sierra Leone started the Tree Planting exercise in 1985. Over these years, he averred, the exercise has been useful in addressing the downward trends of deforestation, land degradation, threats to biodiversity and great loss of Water; which is very vital to human existence.

Additionally, he said, Tree Planting has provided an ideal platform for the reduction of soil erosion, increase in our Water supply and mitigates Global Warming and Climate Change not only in Sierra Leone, but also the World at large. He declared that, no small effort is a wasted effort, stressing that, our action today is significant and has the potential, if properly pursued and managed, to grow and transform our impact on the environment substantially.

Vice President Foh called on all other Ministries, Departments and Agencies, Forest Edge Communities, Federation of Farmers and other Environmental Institutions to partner and collaborate with the Ministry of Agriculture, Forestry and Food Security in organising Tree Planting Programmes each year in order to address the challenges caused as a result of unchecked activities on the Environment.

VP. Foh assured all present, of President Koroma’s very personal commitment and the commitment of Government towards this endeavour. He reiterated that, Government is aware of the nexus between poverty reduction and Environmental Management.

Dr. Victor Bockarie Foh concluded by noting that, “as we pursue our shared goals of creating an environmentally friendly and productive society, it is now my honour, on behalf of His Excellency the President, Dr. Ernest Bai Koroma to officially launch the National Tree Planting Drive – 2017”.