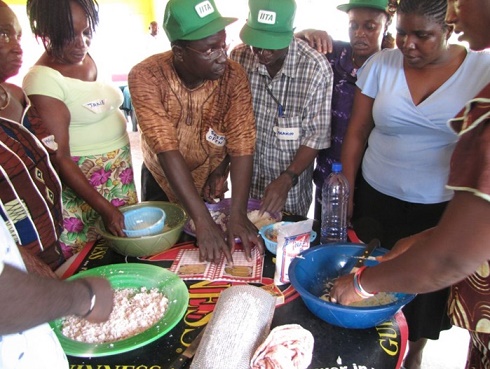 As millions of dollars disappeared from the ministry’s budget, so too did the problem of poor allocation and distribution of farming seeds, fertilisers and machinery became a national scandal, leaving president Koroma’s ambition of Sierra Leone achieving food sufficiency in tatters.

Celebrating five months in office last week, minister Monty Jones – once known as the ‘African Rice Guru’, did not underestimate the challenges ahead.  But he is optimistic.

He told reporters: “Five months in office as the Minister of Agriculture, Forestry and Food Security, I have met with farmers in every District. I have made sure that seeds to be distributed to farmers are there on time. I have attracted big private sector companies, such as Integrated Solution for Africa (ISA) that will do Poultry with 500,000 to 700,000 chickens at all times; and will produce 500,000 eggs every day; grow onions, of which we spend $12 million to import annually. Corn, cocoa and ground nut will be included too.”

Speaking about the projects that he has established to help the country achieve national food security, professor Monty Jones said: “Other projects I have completed in the last five months in office are the SEWA Farm Company that will produce 20,000 hectares of irrigated rice in Torma Section, Bum Chiefdom (Tormabum), Bonthe District; the Lion Mountain Agricultural Company, processing and packaging rice in Bombali; Mountain Lion Agribusiness Company processing and packaging rice in Bo District; Golden Mill Company growing rice along the Lunsar to Makeni high way; and farming projects by the West African Rice Company (WARC) and the Leone Resource.”

“All of these projects are working now or will soon start operations, and will help us to eradicate the importation of rice that is costing the government about $160 million in foreign exchange.” (Photo: Sierra Leone’s Agriculture Minister – professor Rice – Monty Jones).

But is this enough to ensure that Sierra Leone can achieve food security before the president leaves office in 2018?

After all, president Koroma has been promising the people of Sierra Leone that no one will go to bed hungry, since coming to power in 2007. The reality however, is that in 2016, less than 30% of households in Sierra Leone can afford three meals a day.

The prices of most staple foods such as rice have more than trebled, since Koroma came to power in 2007.  Sierra Leone like most countries in Sub-Sahara Africa is heavily dependent on food import.

And as Xikombiso Mbhenyane and Irene Labuschagne of the Stellenbosch University in South Africa wrote recently in theconversation.com: “Sub-Saharan Africa has a long way to go, before it cracks food insecurity”.

So is professor Monty Jones’s food security strategy on the right track to taking Sierra Leone out of food insecurity?

Xikombiso Mbhenyane and Irene Labuschagne say that “Economic growth and wealth is necessary to make progress in reducing poverty and hunger, especially in the face of an expanding population. But governments need to do more than pursue economic growth. The key factor in ensuring food security is inclusive growth – growth that promotes access for everyone to food, assets and resources.” This is what they wrote in theconversation.com:

The richer and more developed countries become, the less likely they are to be food insecure.

Governments in rapidly growing economies have more resources to dedicate to improving food security and nutrition.

But this does not necessarily translate into food for all. For example, just over a quarter of South Africa’s population is food insecure – despite sufficient food being produced at the national level.

Food security refers to the availability of food that is nutritious and safe and a guaranteed ability to get food of good quality.

But this means doing so without resorting to emergency food relief, scavenging, stealing or recourse to similar coping strategies. Food insecurity, on the other hand, exists when food is not easily accessible and households have difficulty securing adequate amounts.

Food insecurity leads to hunger and malnutrition. Hunger is defined as not having enough to eat to meet energy needs. Hunger can lead to malnutrition, but absence of hunger does not imply absence of malnutrition.

Malnutrition happens when a person’s diet does not provide adequate nutrients for growth and maintenance or when a person is not able to adequately utilise the food consumed due to illness. It encompasses under-nutrition – being too thin, too short and having deficiencies from a lack of nutrients – and over-nutrition, which includes being overweight and obese.

Africa’s success in achieving long-term food and nutrition security will depend on several key national and regional drivers.

These include committed political leadership and good governance, quality policies and strategies in the food and agricultural sector, a sound macro-economic environment, inclusive economic growth and increased economic integration.

According to the Food and Agriculture Organisation, the prevalence of undernourishment in sub-Saharan Africa declined from 33% to 23% between 1990/92 and 2014.

But in fact the total number of undernourished people increased during this period – from 175.7 million to 220 million. This was partly due to an expanding population.

Economic growth and wealth is necessary to make progress in reducing poverty and hunger, especially in the face of an expanding population.

But governments need to do more than pursue economic growth. The key factor in ensuring food security is inclusive growth – growth that promotes access for everyone to food, assets and resources.

They also need to implement a mix of complementary and comprehensive food security and nutrition policies and programmes. (Photo: President Koroma and his most powerful ministers).

Initiatives like the annual Africa Day of Food and Nutrition Security emphasise the challenges the continent faces. But it also focuses attention on what is being done to reduce hunger and poverty on the continent.

According to the New Partnership for Africa’s Development, major commitments have recently been made at regional level. These include: Africa’s Renewed Partnership to End Hunger by 2025 and the Zero Hunger Initiative for West Africa.

In South Africa, a national policy on food security and nutrition seeks to provide an overarching guiding framework for the different strategies and programmes of government and civil society.

These and other efforts are already bearing fruit. The proportion of undernourished people in developing regions has fallen by almost half since 1990.

East and southern African countries have also made some progress towards the the goals, but countries in Central Africa are lagging behind.

A total of 18 countries out of 40 considered in the Food and Agriculture Organisation’s overview of food security in sub-Saharan Africa have reached the hunger target. Another four are close. They are expected to achieve the target before 2020 if current trends persist.

Of the 40 countries in sub-Saharan Africa considered in the report:

The United Nations released the Sustainable Development Goals for implementation from 2016. Its targets are to be achieved by 2030. The second goal is to end hunger, achieve food security and improved nutrition and promote sustainable agriculture completely. This is more focused than the Millennium Development Goals which looked to reduce the number to 50%.

Strategies to meet this goal emphasise investment and interventions in agriculture to ensure sustainable food resources.

Given the current drought in South Africa – and the accelerating consequences of climate change on the environment – reaching this goal may be difficult. The consequence will be ongoing food insecurity, including poor nutrition and the poor health status that results from a lack of food resources.