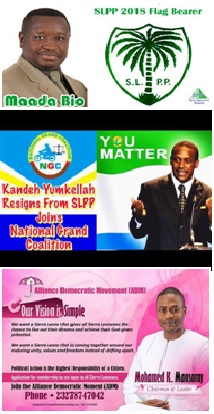 Rtd. Brigadier Julius Maada Bio in his acceptance speech for the Presidential Nomination of the SLPP said: “In 2012 our party’s victory was stolen as blatantly as it had been done in 2007. In 2007 the ballot in 477 polling stations was cancelled when there was in fact no law in existence to permit it. In 2012 the Presidential Election results were declared whilst counting and recounting of votes in a number of electoral districts was still in progress. The SLPP, as a Party that is supremely law-abiding, allowed those rigged results to stand in 2007 and 2012 only because we believe in the maintenance and preservation of peace, stability and security in our nation and we did not want to see our country degenerate into violence and anarchy.

This time around, for the 2018 Presidential, Parliamentary and Local Council elections, we want it to be clearly understood that NOTHING, I repeat NOTHING, short of free, fair and transparent democratic elections shall be acceptable to the SLPP. All of us therefore, government and opposition parties alike, bear full responsibility to ensure that credible and democratic elections are held in an atmosphere completely devoid of intimidation, interference and violence. And the National Electoral Commission (NEC), whose primary legal duty it is to supervise and conduct such credible and democratic elections, bears the greatest responsibility.”

It can be recalled that these have been similar messages preached by ADP’s Kamarainba and NGC’s Yumkella.

Responding to Bio’s allegations, the All People’s Congress said: “Bio’s allegations can be seen as a satanic statement aimed at creating a state of instability and uncertainty in Sierra Leone. Many credible observers drew conclusion that a poorly-organized and poverty-stricken SLPP could not have won the presidency in 2012 polls because President Koroma worked so assiduously to earn himself a second victory on the first ballot that made the SLPP jittery to the extent that they are bent on infusing a state of instability by provoking violence to cause the international community to suggest power-sharing. This power-thirsty strategy of the SLPP is already widely known, and Maada Bio’s statements are supposed to be the document to prepare the ground for the violence which the SLPP is planning to introduce or has already started introducing. In other words, the allegations would be kept as a document in the SLPP’s efforts to convince the international community that ‘we said so’.