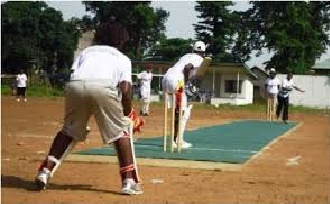 There was a mechanism to go through six formidable trials in putting together a final squad of fourteen players ahead of the tournament.

Sierra Leone cricketers had been recognized in the ICC-Africa Division One Tournament because of their performance that lead them to win a gold medal in last year’s Benoni engagement, beating well established names.

But now at the Prince of Wales Cricket Oval, over thirty players were doing their extreme best to be part of the 18-man team by early February this year. And before the month of April, the final squad would have been given the responsibility to fly the country’s flag among big names in the continental engagement.

Eustace Jones, Deputy Chief Executive Officer of the Sierra Leone Cricket Association and a member of the Selection Committee, spoke about the conditions under which players would be selected to be part of the final squad. He said players were going be selected according their performance and how skilfully they were and how technically they could prove themselves in the oval. He further encouraged the players to focus on what they were doing.

According to Alieu Bockarie, public relations officer of the Sierra Leone Cricket association, the female squad was also preparing to participate in the second edition of the NWACC Women’s Cricket T20 Tournament to be hosted in Ghana.

He pointed out that choosing a specific date for the tournament had posed a massive challenge since the Ghanaian Cricket Association said it did not have enough finance to host participating countries in hotels but could be able to do so in hostels which would only be available either this January or March.

The host nation had given an option to participating countries to choose between these two dates, Bockarie said.