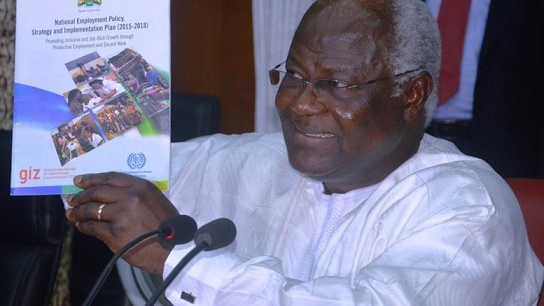 Cynics would say that it is simply too late in the day for discussing government’s benchmarking standards after nine years in office, and having failed to achieve the standards of governance it had set for itself in 2007, and with general elections just round the corner – February 2018.

Since coming to power in 2007, the ruling APC has presented a plethora of programme delivery performance indicators, buried within its much talked about Agenda for Change, which later metamorphosed into an Agenda for Prosperity, after failing spectacularly to improve the economic and social well-being of the people, yet presiding over massive corruption in high places.

But many critics would agree that this is a case of a bad workman blaming his tools for his poor performance.

According to State House though, the general consensus reached at the end of the two-day event is that: “One of the key factors that have been affecting the country’s ratings in view of international benchmarks, is the lack of effective monitoring of development programmes, as well as the absence of reliable data.”

But  it is difficult to understand why the ruling APC party should now claim that there is an absence of performance benchmarking standards across development programmes, in view of the fact that these programmes are largely funded by the international community whose monitoring arrangements they claim are rigorous.

According to State House, President Koroma told delegates attending the retreat that Sierra Leone has many international benchmarks by which the country and government are being assessed, ranked and portrayed in comparison to other countries by the United Nations and other global organizations.

He noted that over the years, Sierra Leone has been very committed to these international benchmarks, but revealed that ‘for some time now, much attention has not been given to this all important development process.’

The president cited examples of where the government is failing. In the implementation of the Millennium Development Goals for 2000 to 2015, for instance, president Koroma told delegates:  ”We achieved some benchmarks, others we almost met, made progress in many others but did not make progress in many more.”

According to State House report, president Koroma stressed the absence of proper monitoring and evaluation of programme implementation, and the absence of data for proper reporting on the progress, challenges and recommendations.

”We cannot afford to miss out on the SDGs, we must learn from our experience with the MDGs”, he told ministers and civil servants.

President Koroma is said to have underscored the significance of international benchmarks in delivering good governance, and emphasised the need for the government to ensure the availability of accurate information, by taking responsibility for the system that would monitor, generate and disseminate reliable information on its own programmes and activities. (Photo: Former minister of information – Alpha Kanu, is now one of three presidential advisers tasked with managing the government’s system for monitoring development programmes).

But the president could not resist taking a swipe at local and international NGOs, whose good work in the country has contributed immensely towards saving lives and reducing poverty.

The president is calling for ministers to take ownership of the development programme monitoring system, so as to ‘deny those NGOs and other civil society organisations that depend on negative reporting from attracting funding by unfairly maligning the country through inaccurate information and reporting’.

This rhetoric will not go down well with international aid agencies, multi-lateral partners and local NGOs.

According to State House report, the chairman of the occasion – Ambassador Dauda Sulaiman Kamara, who is also one of the President’s Advisers, informed delegates that the Sierra Leone International Benchmarking Standards (SLIBS) is President Koroma’s initiative, deriving from his determination to improve the country’s development prospects and reputation.

The newly appointed coordinator of SLIBS – Dr Joseph Sam Sesay (Photo) – who is the former agriculture minister sacked early this year by president Koroma, said ‘the government has come up with 33 benchmarks, and that the rationale of these benchmarks is to keep everybody – especially ministries, departments and agencies (MDAs) on their toes in performing their duties’.

Sesay said that international benchmarks are guidelines for the achievement of Sustainable Development Goals.  He appealed to every Sierra Leonean to take these benchmarks seriously.