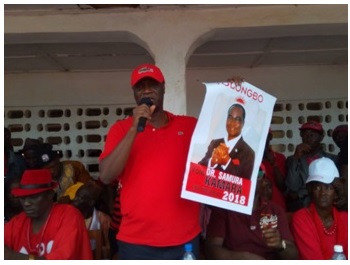 Speaking at a joint press held at the Miata Conference Hall in Freetown yesterday, the four political parties told their supporters across the country to vote APC and its presidential candidate Dr. Samura Mathew Wilson Kamara in the runoff election.

It can be recalled that Musa Tarawally, Presidential Candidate for the CDP over the weekend issued a press statement declaring his support alongside his alleged coalition parties for the Sierra Leone People’s Party (SLPP).

Chairman and Flag bearer of the RUFP, Madam Jemba Gbandi Ngobeh said: “We the Revolutionary United Front Party is neither a part of his coalition nor his decision. Despite our constraints to reach out to our entire membership in the country, we were able to defeat Musa Tarawally and his coalition group which the RUFP is not a part of. In my capacity as flagbearer and presidential candidate for the March 7, 2018 presidential, parliamentary and local council elections, I want to thank all our members, candidates, supporters and sympathizers across the nation for the massive turn out to vote for me and the RUFP.”

She called on all her members, sympathizers, supporters and well-meaning Sierra Leoneans to be peaceful and law abiding for decision and position of the RUFP for runoff to come 27th March 2018 presidential elections. See joint press release on page 12 of this edition.