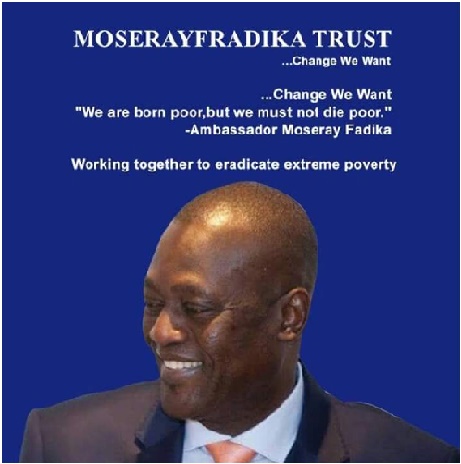 Whilst others continue in strife and corruption, wars and senseless destruction on the African continent, generally, Amb. Fadika had been investing a lot of his own money in businesses, which placed a high priority on the welfare of poor people. Despite running large companies across Africa, he had also dedicated a lot of time to helping the less privileged in local communities across Sierra Leone.  Amb. Fadika had championed many good causes in Sierra Leone, in the quest for change and development for the poor, disadvantaged and youths.

As a strong believer in democracy and development for all, his hard work and dedication has immensely contributed to the socio-economic development of Sierra Leone.  Amb. Fadika had a zest for development that has undoubtedly be the spark, motivation and incitation of enthusiasm for many, especially the youth, in making the world a better place.

Ambassador Fadika came from a poor background and says of his childhood, ‘’I was born in poverty and struggled to pay my school fees. Despite these difficulties growing up as a child in Sierra Leone, I never lost hope, but continued in my efforts to seek a better life. I graduated from University and took an interest in business. Today, I am proud of my achievements in the business sector and contributions to nation-building.”

It is clearly Ambassador Fadika’s determination to succeed, fuelled by such humbling experiences that had instilled in him the need to support development, for both individuals and corporate bodies.  Amb. Fadika highlighted his aim to eradicate extreme poverty and his vision for the youth in Sierra Leone; specifically, to build a stronger economy, support free education from primary to university and provide affordable health care in the country. His belief was, “We are born poor, but we must not die poor”. He advised that “every Sierra Leonean has an important role to play in helping our poor people work their way out of poverty”.

Ambassador Fadika’s passion for Sierra Leone to take its rightful place among global markets was underscored by his equally passionate plea, when he called on Sierra Leoneans in the Diaspora to join the people of Sierra Leone in moving the country forward, regardless of their backgrounds and political affiliations. What made… Read more