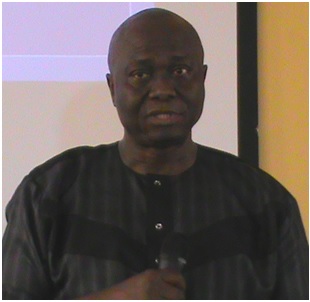 “If we all understand and internalize this aspect, then we will also understand that this Ordinance or Act once passed, is not just for the Ministry of Health but is indeed everybody’s business”, he opined.

Dr. Jambai informed his audience that a lot has already been done by the Ministry in terms of reviewing the Ordinance with support from WHO and now the World Bank. He said the idea with the Review was to both ensure that the Ordinance can be modified to accommodate the present ground reality that can go beyond just environmental health to include larger public health concerns.

He reminded participants not to forget about important issues like the National Public Health Agency, decentralization, ethics and structure of the health sector, and urged them to discuss what needs to be part of the Ordinance and what can come as subsidiary legislation or other laws.

The Senior Health Economist, World Bank, Kofi Amponsah said the Public Ordinance Act was first introduced in 1960 and was amended in 2014, and since then a lot of things has happened.

He said the health sector cannot do everything alone without the support of partners, adding that revising, reviewing and updating this document is very important.

Kofi Amponsah disclosed that the World Bank has been supporting other countries to review their documents, adding that if Sierra Leone wants to update, making sure they have a comprehensive health ordinance that can address most of the emerging health issue, then they will fully support it.

The Deputy Branch Chief, Global Emergency Management Capacity Development, Division of Emergency Operations, Centre for Disease Control and Prevention (CDC), Jennifer Brooks said the workshop is happening because of the Ministry‘s passion for public health in ensuring the health of the people of Sierra Leone is paramount.

She described the meeting as a multi-sectoral process that CDC are about to involve to help support the idea, adding that having a legal framework is important because it is a foundation of a strong public health in a country, as they observed during the Ebola that lot of issues and challenges emerges.

Giving a brief history, the Deputy Chief Medical Officer 1, Dr. Sarian Kamara said WHO provided technical assistance to review the Public Health Ordinance as a result of which they have the zero draft which will be discussed over the three days.

She disclosed that when the Ministry reviewed the zero-draft, they felt the idea of public health has evolved a lot since the 1960s and the draft still heavily talked of environment and sanitation which needed to be changed. She added that they approached the World Bank who agreed to fund the continuation of the review under the Regional Diseases Surveillance Systems Enhancement (REDISSE) programme.

Highlight of the event include statement by WHO Epidemiologist Health Security and Emergencies Cluster, Dr. Wilson Gachari.