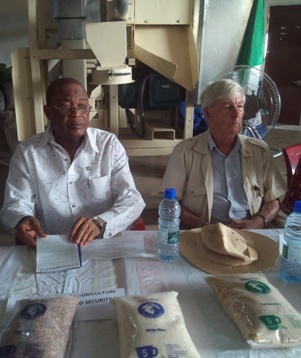 The company, he said fully share his dream and ambition to make Sierra Leone become food self-sufficient. He assured that they will encourage others to follow the same path, and called on the people to share the happiness they are getting from the rice with others.

The company has provided a small mill machine for farmers to mill their rice at free of cost. It has two machines producing ten tonnes and two tonnes.

The commissioning came at a time the Minister of Agriculture, Forestry and Food Security is currently working towards achieving the dream of His Excellency President Dr. Ernest Bai Koroma to make agriculture become a business-centered sector that drives economic growth and ensure that enough food is available for the nation.

Lion Mountain Agro Limited is an agricultural company operating in Bo District since September 2014, under a Memorandum of Understanding with the Government of Sierra Leone, and possesses a certificate of collaboration with the Ministry of Agriculture in Bo District. It has a standing land lease agreement with five chiefdoms for a total land area of 16, 400 hectares for mechanized rice production in Bo District.

The company in August 2015 obtained an initial funding from its donors for a monthly milling operation of 300mt on a monthly budget of $120, 000 for two years duration effective September 2014.

Professor Monty Patrick Jones had the opportunity to commission a rice mill company, Lion Mountain Agro Limited in Bo City on Friday 26th February 2016. The company has added value to the locally produce rice with quality packaging for local consumption. Apart from the normal 50kilogram packaged rice, Lion Mountain also has five cups and ten cups of rice well packaged for those who could not afford to buy in large quantity.

Former Vice President under the TejanKabbah regime, Dr. Albert Joe Demby said they saw the need for Sierra Leoneans to be well fed with locally produced ruce, which was why the company was formed. “Providing quality rice is our own form of contribution towards the development of the nation,” he said, and added that with the cooperation of the local people, especially farmers, the company hopes to continue in that positive direction.

The Minister of Agriculture, Prof. Monty Patrick Jones,  said agriculture is the engine for economic growth and has contributed greatly to employment in the country. Rice, he said is key in agriculture as a staple food for that is cultivated across the country. He pointed out that Sierra Leoneans consume rice more than other countries in Africa. “Government cannot continue spending over $135million annually to import rice, of which the country has all it takes to produce and export,” he said, and added that Lion Mountain is here to provide jobs for mostly young people reduce poverty and improve the lives of farmers. Buying rice from farmers, he said will help them greatly and will inject more money into the country’s economy to improve the wellbeing of the people.

“We don’t want to see people hungry. I am happy that you have added value to rice,” Prof. Jones said. He assure of government’s support towards the company’s good effort in making rice available in the local market.

“The rice we produce here is of high quality than the imported. It has more nutrients than the imported,” says the Minister, noting further that the composition of the proteins is good. “We are going to flood this county with rice this year. We must eat what we grow. We want to develop healthy citizens,” he assured, and concluded by stating that farmers should produce more, sell more and keep the money in the bank.

He Commend them for putting NERICA rice in the market and invite all to feel free to eat it at all times.

Speaker after speaker commended the company for a job well done and admonished farmers not hesitate to sell the rice to the company as very soon shops will be opened in their localities to sell the product.