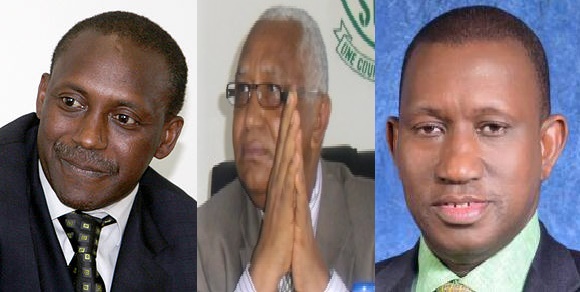 The men, all of whom have declared their intentions to lead the party to the polls, had come together to present a formidable force against Rtd. Brig.  Julius Madaa Bio, who is also hoping to lead the party for the second time after he contested as its flagbearer but lost to President Ernest Bai Koroma of the ruling All Peoples Congress, APC, in 2012.

In her contribution at the meeting former party women’s leader, Isatu Tejan Kabbah, informed Alliance Members that they were tired of having their support divided among them, thus stressing the need for them to come up with a candidate now when it was very crucial in the life of the party.

“We need to face the Paopa Camp as one people with a focus to allow the party the luxury of winning the elections and taking over state house,” she said.

Presiding over the meeting, Minority Party Leader in Parliament, Dr. Bernadette Lahai, MP, revealed that members of the party were currently confused and upset with the current state of affairs.

She explained how some Sierra Leoneans she met in her flight from Dakar approached her, stressing the need for flagbearer aspirants in the party to come together and provide the country with a better alternative to the ruling APC.

Dr Lahai said people believed that the ruling party had failed and were calling on the SLPP stakeholders to learn some lessons from Nigeria, The Gambia and Ghana, where opposition parties now formed governments.

Former Vice President, Dr. Joe Demby, said he felt embarrassed that people had selfishly divided the party in pursuance of their interests.

He said now that they were being asked about what they, as elders in the party, were doing to bring the party together, he would say at the moment it was very unfortunate that most of them were not allowed to enter the party offices in the country.

“SLPP is our party and we will leave no stone unturned to call on our members of parliament not to ignore the role of stakeholders in ensuring that the party is together once again,” said Dr Demby.

He appealed to the flagbearer aspirants present at the meeting not to forget about putting the party’s first in their dreams to lead the party and eventually to statehouse, emphasising that time was against the party.

Reacting, on behalf of the alliance, John Oponjo Benjamin, who was onetime chairman and leader of the party and now aspiring to be its standa5rd bearer, assured the meeting that they would soon bring up a candidate.

He accused the police of compounding the division in the party, by siding with the national officers whom he claimed were busy breaking the rules of the party to have their ways.

He admonished the ruling government not to destroy the opposition party, noting that it would adversely affect democracy and good governance in the country.