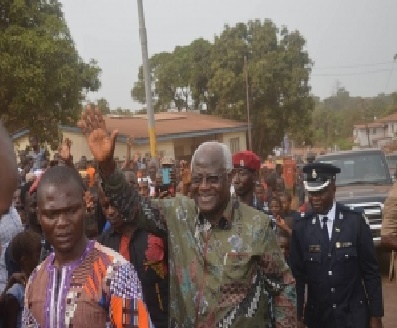 He also demonstrated that character trait during the Ebola epidemic;he was hardly ever in his office at State House, always on the move, never travelling abroad but staying in the country to inspire and energize local and foreign health personnel and experts battling against the dreaded disease which has now been defeated.

The president was on the move again in the last couple of days inspecting community development projects and trying to resolve potential conflicts.

He was at Mile 6 in the outskirts of Freetown, Lumly and Lakka in the west and Leicester up in the hills surrounding the capital.

At the Lakka Government Hospital (formerly known as Lakka Chest Hospital for TB patients) he inspected the hospital which has undergone some dramatic changes in the last few years and commenced the resolution of a disagreement between youths in the area and the hospital authorities.

According to the State House communications unit, the youths wanted to continue to use a plot of land that belongs to the hospital for their soccer matches. This is the kind of mundane but politically sensitive issues the president has to deal with everyday.

At Leicester village, a small Krio village near the University of Sierra Leone, the president also spent time discussing with the local population on how best to demarcate land between the university and the local community.

The university is about to embark on an an extensive rebuilding and rehabilitation of its administrative and faculty buildings while the Leicester community are in the middle of tree-planting in an area that has suffered massive deforestation due to the cutting of trees for firewood and coal over many years.

Finally, President Koroma and entourage which included some cabinet ministers, visited a construction site at Mile 6 village which is six miles from Waterloo (the largest town in the area) and about 26 miles from Freetown.

The site is being used as a permanent home for flood victims. Freetown suffered devastating flooding last year, rendering thousands of people homeless. New and modern homes are being constructed for those who want to relocate to Mile 6. The resettlement has some challenges but those who have been relocated so far seem to be adjusting pretty well to their new homes, according to the State House communications team. The Chinese government and the Sierra Leone Housing Corporation (SALHOC) are constructing the new homes.