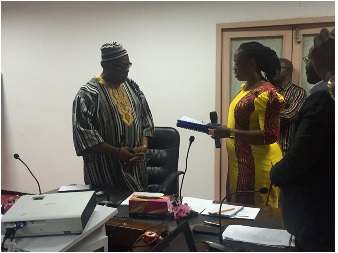 Justice Cowan disclosed that the CRC Secretariat was informed last Thursday January 19, 2017 at around 5.30 p.m. by a senior State House official about the presentation of the Report scheduled for 11.00 a.m. on Friday January 20, 2017, adding “the CRC Secretariat expected a short warning so that we can contact Members of the Committee who will  accompany the Chairman to the presentation ceremony at State House.”

It was reliably learnt that the document was ready as it was only “to be retrieved from the printers since only a copy printed with special hard cover and not an ordinary cover that will actually be presented to His Excellency the President at the  State House ceremony.

The actual date for the presentation ceremony will be known this morning Monday  January 23, 2017, possibly tomorrow Tuesday January

24, 2017, depending on President Koroma’s schedule of duties, to end  this Chapter on the CRC.

President Ernest Bai Koroma is on record for encouraging Sierra Leoneans to come up with ideas,  and has said  “the CRC must listen to everyone, and come up with a document that will make governance better; that will deepen democracy; that will make everybody feel part and parcel of government machinery”.

According to the CRC Chairman, members of the CRC, during the Plenary Sessions, deliberated on the issues raised by members of the public, after the publication of the abridged draft report  earlier in 2016.

Recounting the further steps to be taken after the presentation of the final report to the Government, Justice Cowan has said “from the point of the Government issuing its White Paper on the Final Report, an Amendment Bill to the 1991 Republican Constitution of Sierra Leone will be prepared  and  taken to Parliament.”

The Government White Paper will form the basis on which the Legal Draftsmen in the Law Officers Department will prepare the Amendment Bill to the 1991 Republican Constitution which the Learned Attorney General and Minister of Justice Honourable Joseph Fitzgerald Kamara will pilot through Parliament for it to go through the Parliamentary process and  for it to become an Act of Parliament, BUT,  “President Koroma will not sign it into LAW until it has gone through a National Referendum, according to Section 108 of the 1991 Constitution ALTERATION OF THE CONSTITUTION:” which states, among other things, as follows:-

“(1)  Subject to the provisions of this section, Parliament may alter this Constitution.

(b) the Bill is supported on the second and third readings by the votes of not less than two-thirds of the Members of Parliament.”

Subsection (3) states, “A Bill for an Act of Parliament enacting a  new Constitution or altering any of the following provisions of this Constitution, that is to say, (as listed in the Constitution, most of which are entrenched clauses)

“shall not be submitted to the President for his Assent and shall not become Law unless the Bill, after it has been passed by Parliament and in the form in which it was so passed has,  in accordance with the provisions of any law in that behalf, been submitted to and been approved at a Referendum.”

The National Electoral Commission (NEC) has already intimated that the Review of the 1991 Constitution is part of their programme for the conduct of the February 2018 General Elections – Presidential, Parliamentary and Local Government.

If the National Referendum is conducted during the first half of 2017 and the Amended Constitution is signed into Law immediately after,  then the General Elections – Presidential,  Parliamentary and  Local Council  – will be conducted as scheduled for February 2018.

The Ruling  All Peoples Congress Congress (APC) then in opposition led by Ernest Bai Koroma, was first elected to office in the 2007 Parliamentary Elections of August, 2007 and the Presidential run-off poll on September 8, 2007.  President Koroma was re-elected for a second five-year constitutional term of office on 17th November, 2012 in the first ballot with a 58+ percent of the total votes cast.   This means that President Koroma’s present Government entered its final year of office on November 17, 2016.

The Government White Paper on the  Constitutional Review Committee  ((CRC)  Final Report,  will be the determining factor whether President Ernest Bai Koroma , who is 63 years young, as LEADER of the All Peoples Congress (APC) political party, can run in  the scheduled February 2018 Parliamentary election, that is, if a PARLIAMENTARY DEMOCRACY SYSTEM OF GOVERNMENT is adopted, like in Britain and Israel, in which case he can become an EXECUTIVE PRIME MINISTER of Government,  if  the APC political party wins the majority of seats in Parliament, and the Executive Prime Minister names an Eminent Sierra Leonean as ceremonial President.

In a Parliamentary Democracy System of Government , there will be a  TERM LIMIT of five years at a time  mandate for the  Government in  power; and the RULING PARTY CONTINUES IN GOVERNANCE UNTIL IT LOSES A GENERAL ELECTION.

In Britain the Prime Minister sits in Parliament as an Elected Member and he appoints Cabinet Ministers  from the elected Members of Parliament in a Parliamentary Democracy.

Will the Parliamentary Democracy System of Government, led by late Executive Prime Minister Sir Milton Margai, at Independence in 1961, be re-introduced by President Ernest Bai Koroma ?