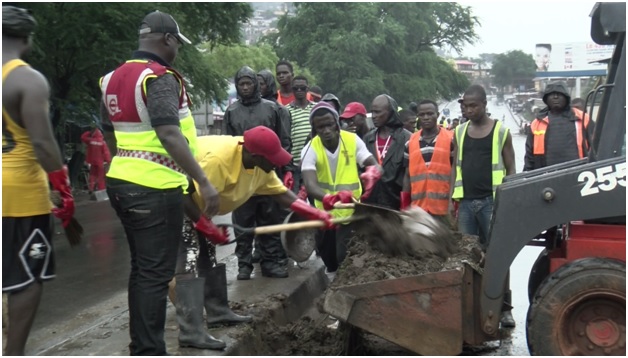 Director of media and communication, Pavi Fort Construction Company Abu Bakarr Kamara said the Chief Executive Officer of the company initiated the idea f cleaning the dump site in a bid to prevent another major flooding in the capital city, adding that the free flow of water would eventually prevent further destruction.

Kamara added “Pavi Fort Construction Company considers the filth as a grave challenge to the government, especially at the peak of the rains therefore as a company we have to play our own part in complimenting the frantic effort of the government.”

He explained that during the rigorous cleaning exercise they have been thoroughly sensitizing community people, in order for them to refrain from dumping garbage into water access ways. He pointed out that the cleaning activities specifically targeted the Ferry junction unto the ‘Up Gun Turntable’ at kissy road in the east part of Freetown.

A participant at the cleaning exercise, Mohamed Barrie said they decided to be part of the process as a way of demonstrating the level of which they love Sierra Leone, adding that it was on such occasion one would show his/her level patriotism. “This is for us not for anyone else, but to ensure I serve my country Sierra Leone that is why I also mobilize my fellows around the community to join the process.” He emphasized.

Deputy Organizing Secretary-Youth in Development Forum, Gibril Conteh said that clearing of garbage was not an easy task, adding that companies in Sierra Leone should class Pavi Fort as a role model and they should work in the same direction to protect the lives of Sierra Leoneans.