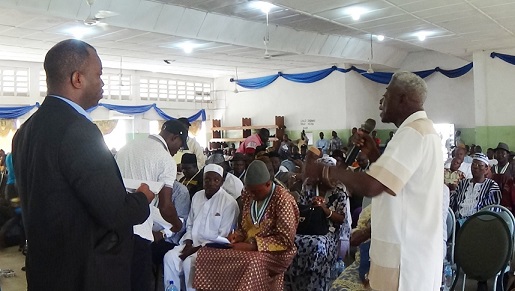 The programme which also saw the pronouncement of new Executive Members of the National Council of Paramount Chiefs was aimed at revamping Sierra Leone’s Chiefdom Administration based on the Rwanda experience. In his Power Point Presentation, the Deputy Director of the Local Government Finance Department in the Ministry of Finance, Adams Tommy said the Ministry of Local Government embarked on the study tour because of their firm conviction that even though Sierra Leone has made substantial progress in the implementation of the decentralization reform, it can still learn valuable lessons and share experiences with other countries. The tour, he said has put the Ministry in a better position to streamline Sierra Leone’s decentralization process towards strengthening the country’s Local Government Entities for improved local governance and service delivery as well as provide officials of the ministries responsible for Local Government and Finance the opportunity to benefit from solid international experience of a country in the African Continent that is steadily making substantial progress in the implementation of its decentralization reform. Mr. Tommy said team which also comprised of himself, the Mayor of Makeni City, Madam Sunkarie Kamara, Director of Decentralization, Alhassan Kanu and the UNDP’s Project Manager in the Ministry of Local Government Pios Bockarie visited various places of interest including, Rwanda Revenue Authority, Kigali Governance Board, Kisoi Genocide Memorial site, Office of the Ombudsman, Rwanda Ministry of Local Government, Ministry of Finance and Local Council Association. He underscored the importance of Chiefdom Authorities in national development and stressed the need to maintain the path of continuity in governance, strengthen and depoliticize institutions and develop local communities to ensure self-reliance among others while reiterating government’s desire to create the enabling environment for sustainable growth. On lessons learnt from the tour, Mr. Tommy intimated that in Rwanda, the non-partisan system of elections has eliminated political manipulation in local governance and public services delivery and also opened up space for many people to aspire for local government positions while the debate for non-partisan local government elections in Sierra Leone is currently rife. While Rwanda reports a smooth, cordial, reinforcing and productive relationship between the Local Government and Finance Ministries, the situation in Sierra Leone, he said, requires substantial improvement. “There is evidence to show that the constant and productive engagement of central government and local governments with the citizens has substantially increased the confidence of the citizens in Rwanda’s governance system and gingered them up to effectively participate in the decentralization process”, he explained noting that, the participation of women in Local Governance is quite strong while Sierra Leone is gradually picking.  He said the Government of the Republic of Rwanda allocates minimum 15% of its domestic revenues directly to Local Governments, 10% of which is meant for Local Economic Development (LED) Projects. He expressed the need for the Government of Sierra Leone to set aside specific grant (from its domestic revenues) purely for Local Government operations.  Mr. Tommy informed his audience that the local governments of Rwanda maintain a very effective and productive relationship with their parent Ministry which accounts for the effective oversight by the Ministry. The Finance Director averred that “adequate budgetary allocation for the monitoring and supervision activities of the Ministry of Local Government is critical for the effective exercise of its oversight, monitoring and supervision responsibilities” and  also emphasized the need for the Government of Sierra Leone to set aside specific grant from its domestic revenues, purely for Local Government operations  and ensure responsibility for their distribution rests solely in hands of   the Ministries of Local Government and Finance.  He called for the expansion of the scope of Sierra Leones budget ceilings and empowerment of all government entities including non-state actors to monitor outcomes of budget implementation by all government agencies including local and chiefdom councils as well as the creation of Governance Board to promote the principle of good governance and decentralization. Religious and Ethnic conflicts, he added, have devastating ramifications and can wreak serious havoc on the socio- economic and cultural and  development of a country and entreated Sierra Leoneans to continue on their enviable religious and ethnic path. He described Self- reliance, Nationalism, Patriotism and strong political leadership and people’s will as some of the factors that led to the rapid transformation of Rwanda and called on Sierra Leoneans to imbibe those attributes and ensure that things that would serve as reminder of the past war and a deterrent to the nurturing of conflicts that will destabilize the country and reverse the gains that it has been made are established and maintained. Permanent Secretary in the Ministry of Local Government, Sadique Kapua, thanked the Paramount Chiefs for their impressive turnout, and described the occasion as a manifestation of government and development partners’ desire to ensure chiefdom authorities are deeply involved in development programmes. The former Chairman of the National Council of Paramount Chiefs, P.C. Charles Caulker, on behalf of his colleagues, thanked government and UNDP for what he described as a ‘laudable initiative’ and called on government to replicate Rwanda’s best practices. Meaningful contributions were made by other Paramount Chiefs from various chiefdoms in the country.