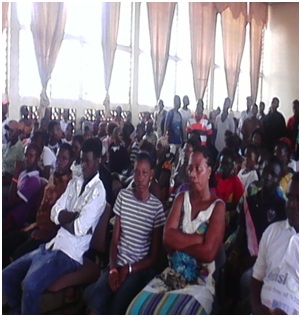 The ongoing Youth in the Drainage Project was funded by the Road Maintenance Fund Administration (RMFA). The project employed over one thousand young people to clean drainages across the country. But as the project has been on for over five months, the young people have raised concerns over the failure of the ministry of youth Affairs to pay them their salaries.

The Minister of Youth Affairs commended the young people for their commitment to the job in making sure that drainages are kept clean at all times even after not having salaries for over four months. He stated that the commitment and exercise of patience that these young people have shown in the project is a display of loyalty to their country and it clearly shows that they believe in the leadership of President Koroma and his agenda for prosperity.

Mr. Alimamy Kamara applauded the effort of government in showing its commitment to empower the youth and thank the road maintenance fund for its continued effort to provide the fund. He appealed to the young people to continue to exercise patient and always show commitment in their work as they have been doing, noting that the project is going to continue.

The displeased youth who were not happy over the delay of their salary by the Ministry of youth Affairs expressed joy when they received the news from the minister that they will start paying them on the 18th of November, 2015.