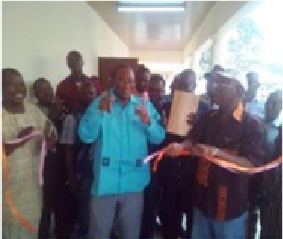 The programme attracted pupils and teachers from 40 Senior Secondary Schools in the Western Area including St Joseph’s Secondary School, St Edwards, Government Rokel, Model, Grammar School, Boys High School, Evans International and Laura Dove.
According to Mr. Sankoh, Agricultural Science is a lucrative job; when once you take Agriculture as a career you can either become an Agriculture engineer, Production Officer, Specialize Crop Producer, self-employee, among others.
He said Agriculture contributes to the stability of any state; without Agriculture a state will not be financially stable, adding that investment in Agriculture will lead to employment, large rice farming, among others.
The Chief Education Officer, Dr. Alhaji Mohamed Kamara, among other things, said agriculture is a catalyst for sustainable development, adding that he is urging all schools to activate school garden which had suffered natural death.
Giving an overview of the organization, the Chairman and Co-Founder of SOBBA, Santos A. Conteh said SOBBA was formed to help farmers develop their farming practices from rudimentary subsistence farming into viable agricultural enterprises, stating that their main focus is to help alleviate poverty and nutrition deficiency by developing and making available new and improved seed varieties, tuber cutting and improved farming techniques to farmers.
Mr. Santos Conteh said SOBBA produces primarily highly nutritious staple crop mix, rich in protein and carbohydrate including rice, maize, cowpea, soybean, cassava, groundnuts, among others, stating that their resources includes three farm locations with a total farm area of 170 hectares, 350 dedicated contract farmers, training management team, among others.
He informed participants that they organized the symposium as part of their services which is to facilitate agriculture education so that pupils and their teachers will see the need to pay more attention to Agricultural Science at Secondary School level.
While unlocking the potential of Sierra Leone’s youth generation, the Co. Founder of SOBBA, Mr. Joseph Conteh said farming is not modern day slavery, stating that Agriculture is seen by young generation as a poverty industry, counselling them that they should develop their mind and create the change.
He said the young folks don’t want to go into Agriculture, explaining that 60 percent of youths are unemployed and do not want to go into farming because it’s a hard and dirty job, saying they prefer to be idle and doing other non-profitable job , noting that Agriculture should be seen as a money making machine.
After he had explained why students must see agriculture as a career, he encouraged young generation youths to involve in agriculture so that they will be able to meet with upcoming challenges.
Before the discussion begins, only two pupils out of about 200 acceded to become a farmer but at the end of the discussion, almost all of the pupils pledged to pay attention to the sciences and particularly Agricultural Science so that they contribute in the farming industry.