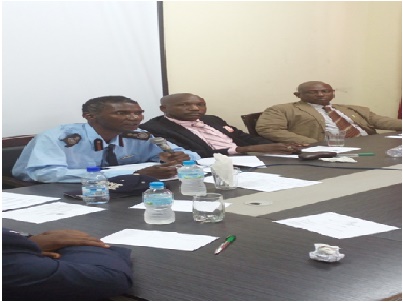 He said during the fire disaster at Kissy, it took the Fire Force eight hours to put out the fire. The Chief Fire Officer however said that, fighting fire in the provinces is much easier than that of Freetown because the Provinces have more water hydrants, and are free from traffic congestion.

He informed journalists that Fire Force has received five fire engines from Germany to ensure the country is safe from fire and similar manmade disasters.

The Chief Fire Officer disclosed that, Fire Force has presented a Fire Safety bill to parliament, which would have enforcing powers to enforce laws geared towards fire safety in the country.

Also at the press briefing, the Deputy Minister, Theo Nicol informed pressmen that the major source of fire disaster is electricity, and appealed to journalists that it is their key responsibility to sensitize the public on fire disaster prevention. He further stated that, The Fire Force cannot prevent the occurrence of fire but can only extinguish it.

The Outreach Coordinator, Office of the Government Spokesman, Abdulai Bayraytay, pleaded with the public to appreciate the efforts of the Sierra Leone Fire Force. He expressed disappointment over the height of lawlessness being demonstrated by members of the public. The Outreach Coordinator said that, during the incident at Siaka Steven Street, some personnel were injured, and the fire engine was also destroyed. He maintained that the media would provide footages of the incident and those identified would be prosecuted. ‘’We cannot allow lawless youths to destroy the integrity of this nation, ‘’Outreach Coordinator Abdulai Bayraytay warned.