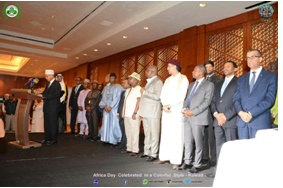 In the address that was delivered by the Acting Dean of the Diplomatic Corps, Mr. Abdulkadir Amin Sheikh of the Embassy of the Somali Republic and that of the Chief Guest of Honour, the Deputy Foreign Minister of Kuwait, they called for a minute of silent prayers to be observed in remembrance of their two colleagues, H.E. Mr. Ibrahim Bakarr Kamara of Sierra Leone and H.E. Mr. Konah Blackett of Liberia, both of whom sadly passed away in February and March this year, respectively.

Although the event was meant to be a low key affair because of the loss of the two African Ambassadors, yet it gathered a huge crowd and wider media coverage by the local media in Kuwait. The Sierra Leone Mission in the State of Kuwait participated in the exhibition to celebrate the event and the Charge’ d’Affaires, Mr. Duwai Sellu Lungay was among colleague Heads of African Missions that stood behind their country flags to welcome the Deputy Foreign Minister and other guests to the event.