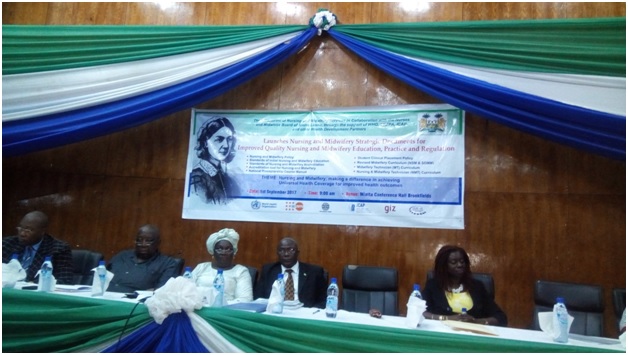 According to her, the above named documents would fully address the three pillars of the nursing profession which are education, regulation and services.

In his contribution, the chairman of the parliamentary oversight committee on health and sanitation, Hon. A.B. Sesay said that the strategic documents is relevant and timely, as it would help to address  health related issues in the country.

Hon, A B Sesay went on to state that nurses and midwives were of great importance to society and they should be given the greatest attention required of them.

He furthered that doctors only spend few hours with patients and they are left in the hands of nurses and midwives, who will be taking care of the patients before they are discharged.

He continued that law makers in Sierra Leone have great respect for nurses and midwives and parliament would continue to give them their fullest support as and when necessary.

Giving an overview of the launching and orientation session,  the Chief nursing and midwifery officer in  the Ministry of Health and Sanitation, Mrs. Hossinatu  Koroma maintained that the strategic documents would also help  improve the capacity and knowledge  of nurses  and midwives in Sierra Leone.

She pointed out that gone were those days when everyone would just wake up in the morning and decide to practice nursing profession without going through the normal procedure.

Formally launching the strategic document, the Deputy Minister of Health and Sanitation 1, Madina Rahman said that the theme for the launching was making a difference in achieving universal health coverage for improved health outcomes.

Madina Rahman informed her audience that nurses and midwives were the backbones of every healthy nation and they should be treated with all seriousness.

She continued that nurses and midwives were the centre of the nation’s dreams and aspirations towards   achieving universal health coverage.

She concluded by expressing profound thanks and appreciation partners including the world health organization, UNFPA, ICAP for their support in improving Sierra Leone’s health system.