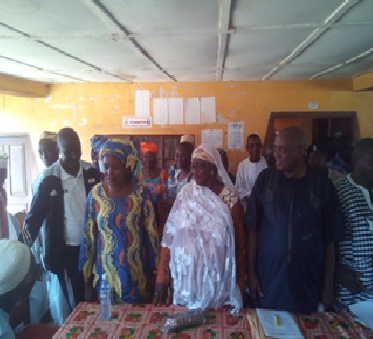 Niawa Chiefdom is one of the most peaceful chiefdoms in the Kenema District whose people are enjoying a calm and quiet security environment. Although the people have been carrying out their agriculture and other economic activities, these are however not enough to solve most of their felt-needs. The Chiefdom can boast of eminent personalities that are all over the world and were looking for such an opportunity to come together to facilitate development in their native community.

As Chiefdom that people do not relatively know about, members of NCDO have committed themselves to sell its good image at local and international levels in order to attracts investment opportunities and ensure that they transform their community into a safe paradise on earth.

A meeting was held on Sunday 20th March 2016 at the Community Centre of the Chiefdom Headquarter Town, Sendumei where people in all works of life were given the opportunity to highlight their challenges and pledge their commitment in taking leadership roles to facilitate development, peace and unity in their chiefdom. Chiefdom Authorities, Women, youth, religious bodies, Nurses, School Children representatives expressed nice sentiments about the formation of NCDO, which they see a liberator of their chiefdom from its current poor status into one of the most enviable chiefdoms in the country. Representatives from Kpatawo, Mabondor, Teiyama, Niawa and Kakplawao Sections had the opportunity to make statements. Some of the challenges they highlighted are lack of good raods, water supply, schools, health facilities, GSM communication service etc.

At the end of the day the people are expected to put their immediate felt-needs in a letter to NCDO, which will be used as a guide to raise funds and solve the most pressing challenges.

The Chairman of NCDO, Alfonso Alpha Yarjah informed the meeting that he is not happy to see that most prominent people from the chiefdom are not residing in their native community to deliver the expected goods. “It is time to turn our heart to our chiefdom, bring the expected unity and enhance development,” he said, noting that the organization started with over 50 committed members that are willing to build their chiefdom. Mr. Yarjah said monies raised as monthly contributions, donations and for registration will all go towards development projects in the chiefdom. He warned the people to stop backbiting, gossiping and other anomalies that bring indifferences in the chiefdom.

Those present at the meeting were given an opportunity to shake each other’s hands as a sign of unity.

Hon. Francis Amara Konuwa of Constituency 014 in the Kenema District pledged an annual support of Le5million, which will commence this year. The chiefdom, he is not poor, rather he named disunity as the main cause of the level of poverty amongst the people. The Member of Parliament admonished NCDO Executive Members to be focussed and hardworking in delivering the expected goods. He called on the people to have respect for each other and to support the development the organization will bring to them.

Paramount Chief Madam Mariama Joe Taima in her keynote address pledged her commitment and leadership to ensure that the organization succeeds. “I am Mother Niawa and will continue to maintain that title till death,” she said, noting that her doors are always open to support and discuss development activities for her Chiefdom. PC Madam Taiwa thanked Mr. Alfonso Yarjah whom she described as Father of Niawa for his leadership role in the organization. “We should work together to bring development tour chiefdom,” she challenged her people.