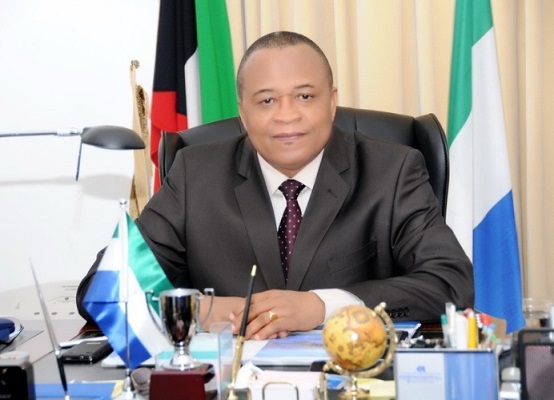 Upon their arrival at the airport in Kuwait, they were received by the counterpart local recruiting agents and taken to their respective offices that would get them distributed to interested employers without a reference to this Embassy. Once taken to their employers, they become incommunicado where they will have to permanently stay within the confines of their new workplaces.

The Embassy would come only to know about their presence when they escape after discovering that they had been lured into servitude and solitary confinement by their recruiting agents in Sierra Leone who deceptively and extortionately designed their journey as all rosy and cozy. That is the time they would come seeking shelter and refuge at the Embassy.

The Chancery had often times been inundated with an influx of ‘runaway’ maids and accommodating such a large number posed an uphill task and a challenge to the Embassy. The Kuwait Government had to provide a decent shelter with modern facilities for the runaway maids, pending negotiations with their masters for their release and eventual repatriation to Sierra Leone for those maids who chose to return home. So far, a total of 63 house maids have been repatriated, some at the cost of the Embassy and or the Ambassador and Diplomatic staff.

On the other hand, there are Sierra Leonean housemaids still working on their volition in Kuwaiti households, and it is a fact that some were being subjected to a life of servitude. But with the intervention of the Embassy, this attitude by some ‘Kafils’or Masters has been mitigated.

However, there are also housemaids who absconded but chose to stay on their own in rented apartments, surreptitiously working in restaurants, factories and private clinics. Even with this category of maids, the Embassy monitors their activities and provides counseling as and when required to do so.

Mr. Thullah, the author of the post on social media on the status of Sierra Leonean housemaids in Kuwait is a regular visitor of the Embassy. He has never discussed this observation with the Embassy staff during his many visits. The Embassy therefore, does not deem his intention as genuine; and the manner in which he dramatized the matter by depicting the housemaids as sex objects is absolutely INCORRECT and MISLEADING.

The plight of Cameroonian house maids in Kuwait cannot be compared with those from Sierra Leone. Cameroon has got no resident Embassy in Kuwait for recourse by housemaids from that country. This situation, therefore, renders them susceptible to being hurt by some wicked ‘Kafils’ (Masters) with impunity.

The Sierra Leonean public should therefore not be swayed by testimonies from Cameroonian returnee housemaids. The Embassy has facilitated the voluntary repatriation of sixty of our compatriots. Seek to hear the testimonies of these returnees. For those that are still in Kuwait, they can be reached by phone, WhatsApp and IMO.

In conclusion, the Sierra Leone Mission in Kuwait wishes it to be known that it has largely succeeded in addressing the problems created by the multitude of rogue recruiting agencies in Sierra Leone, and now on top of the situation. All Sierra Leonean housemaids in the data base of this Embassy are safe.

“We read with great disgust and dissatisfaction the article making the rounds on social media accusing His Excellency, Ambassador Ibrahim Bakarr Kamara as part of the syndicate of trafficking female Sierra Leonean teenagers as sex slaves to Kuwait,” the release stated.

Sierra Leone and Kuwait have had diplomatic relations since the 80s and these relations have been growing stronger and stronger. In fact Sierra Leone along Senegal and Niger, were the only West African countries that contributed troops to the allied forces that liberated Kuwait after the invasion of Iraq in 1990. Kuwait has come to the aid of Sierra Leone on a number of times over the years. Thus, it would be ludicrous and unthinkable to allow the issue of housemaids to negatively affect these well-established relations.

What is at stake here is not only the sisters and vicious rumors being spread and mounted against the Embassy of Sierra Leone in Kuwait; rather, the greater concern here is that such smearing of the reputation of Kuwait may affect the already cordial bilateral existing diplomatic relations between the State of Kuwait and the Republic of Sierra Leone.

As I write, there are hundreds of Sierra Leoneans residing and working in the State of Kuwait, and some of them are gainfully employed. Speaking to me last night in a telephone interview, a Sierra Leonean –British Professor of Diplomacy and International Relations at the Qatar University suggested that: “There is every need for the Government of Sierra Leone to put a definitive halt to these unscrupulous local recruiting agencies whose only concern is to enrich themselves out of the miseries of their compatriots.”

What is more appalling and disappointing, Professor Abdul Razack Lavallie said, is when one realizes or comes to know that the most heartless and most notorious amongst the local recruiting agents perpetrating these malpractices against the Sierra Leonean sisters were people who lived long in the Middle East in general and in the Gulf States in particular.

“So, they are quite aware of the inhumane treatment meted out to housemaids in some of those countries. A stronger suggestion is to bring those local recruiting agents to book.”

He reiterated that Government needs to make thorough investigations into their dubious and fraudulent earnings to find out the sources of their income. And a stronger suggestion, Professor Lavalie continued, may be for Government to interrogate some of those housemaids who were repatriated to Sierra Leone by either the Embassy or the Kuwaiti Government in order to have details of the ordeal they were subjected to go through and how they got to Kuwait.

Such information, the Professor believes, would definitely warrant the arrest of some of those recruiting agents, and those found guilty must have a penalty to pay and some reimbursements to make as well.

“Perhaps it would be advisable for the Government of Sierra Leone, particularly, the Ministry of Foreign Affairs & International Cooperation to issue a press release to condemn in the strongest terms escalators and exponents of these baseless rumours in the social media or elsewhere in order to make Government’s position clear in relation to the smearing campaign going on by individuals with some dastardly ulterior motives,” said the Professor.

This, he concluded, should be done as soon as possible because a realization must be made that the social media is wide open and is accessible to everyone today.