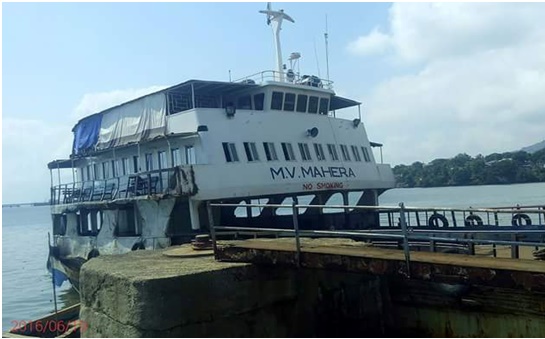 Despite several concerns from passengers the Sierra Leone Maritime Administration (SLMA) still continues to give accreditation to this rotten ferry to operate. It could be recalled that several years ago a disastrous incident occurred when a Helicopter belonging to a Nigerian businessman, previously grounded and later given clearance to operate, crashed with the Togolese Football team returning home from a match played in Freetown.
This death trap ferry was provided by the British Government’s Department for International Development (DFID) to the Government of Sierra Leone under the leadership of the late President Ahmed Tajan Kabba and said to cost one million United States Dollars; the MV. Mahara ferry operated for about one and half year and then developed an engine problem, forcing the Government of Sierra Leone to purchase two brand new Caterpillar engines in order to keep it in operation. The ferry was later privatized and given to an Estonian to run and was subsequently passed on to a Sierra Leonean Lebanese businessman, proprietor of the Great Scarcies Navigation Company.

Presently, the ferry seems to be resting on hot waters as it fell aground a couple of days ago after berthing at the Kissy Ferry Terminal jetty. On Sunday, it attempted to leave harbor but the engineers were sensible enough to offload the vessel of its passengers.