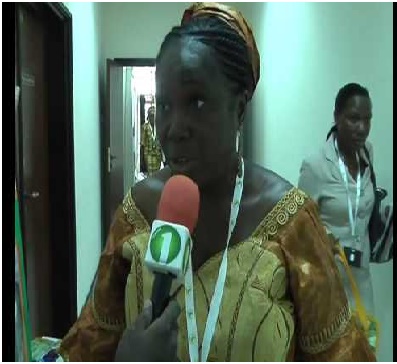 However political analysts have cautioned for that sentence of Hon. Dr. Lahai’s statement not to be considered as a declaration of her intention to run for the Sierra Leone’s People’s Party Flag bearer position until she makes a more detailed statement of her interest.

The Minority Party Leader who was addressing one of the Presidential Nominees Alhaji Dr. Alpha Kanu, approved Ambassador-at-Large and Presidential Adviser recalled how she together with newly approved ambassador interacted during parliamentary sessions of the third parliament in the second republic of Sierra Leone when he was Member of Parliament.

She said Alpha Khan as he is fondly called as a great debater, whom she always wished to speak after.

She said that was because when she speaks before him, he would definitely smash all the points she made, and when she speaks after him, she would also counter his points.

Also making his contribution during the approval session, Speaker of the House of Parliament Hon. S BB Dumbuya quoted Hon. Rado Yoki who maintained that Alpha Khan has made a name for himself.

“That statement is perfectly correct”, the Honourable Speaker maintained, noting further that the newly approved ambassador’s name is now a household name in every part and corner of the country.

He said when the Ambassador was a member of Parliament, then their party at the opposition had just 27 members while the ruling party then had over 80 members, he said Alpha Khan together with three other APC MPs, including him won nearly all the debates for the minority party then.

He said Alpha Khan was a versatile man who proved his mantle in every committee he was appointed to work in.

He went through the offices Alpha Khan has worked with as a politician, from an honourable member of parliament, publicity secretary of the ruling All People’s Congress, Minister of Mines and  mineral resources, minister of information and communication and now Ambassador-at-Large and Presidential Adviser.

Giving the above, the Speaker of the House of Parliament expressed hope that Alpha Khan is going to give a measurable account of himself at State House.