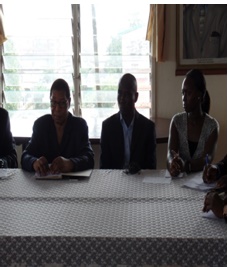 Keynote speaker, Dr. Matthew Teambo, Minister of Labour and Social Security, said the formulation of a National Policy for the Aged is important because there has never been in the history of Sierra Leone a legal framework that specifically looks at the needs of this vulnerable group.

He said “older people have worked relentlessly and invaluably in building the political, economic and social fabric of Sierra Leone, yet many are faced with health, social, and economic challenges in their respective communities.”

To help older people in Sierra Leone live a dignified life, Dr. Teambo highlighted that, in 2002 the Ministry of Labour and Social Security initiated and implemented the Social Protection Act, which gave birth to the National Social Security and Insurance Trust (NASSIT), a scheme which makes provision for older people to benefit from a pension service after retirement.

He said “addressing the challenges and problems of Older people in the country was crucial to the future development of Sierra Leone, noting that: “according to the United Nation World Population Prospect revised in 2015, 82% of 233 countries are experiencing an increase in the proportion of older persons between 1980 and 2015 and 99% of these countries are expected to see a proportionate increase of the age 60 years and above between 2015 and 2050.”

This according Dr. Teambo means that Sierra Leone and other African countries, which have a youthful population at present is expected to be outnumbered by older people by 2050.“The question is, how prepared are we to address the problem of the aging in Sierra Leone.”

Meanwhile, he said, the Ministry of Labour and Social Security has decided to hire a consultant, Glynnis Cummings-John, Help Age International’s Technical Inclusion Advisor in Sierra Leone, to ensure the formulation of the National Ageing Policy, which will address present and future challenges that older people are faced within the country.

Even though older people are custodians in communities because of their knowledge and experience, he said, it was rather unfortunate that communities despise older people instead of embracing them.  “I have observed that resource allocation for service provision for older people in Sierra Leone is nothing to write home about,” Kabia said.