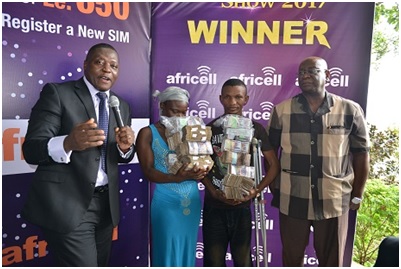 Tejan, almost two months ago, slipped and fell walking along one of the busy streets of Freetown. As if that was not enough, a car rode over his left leg, leaving him with broken bones, writhing in excruciating pain. Fortunately, he was rescued by a passer-by. But because of the freakish nature of the accident Tejan sought for traditional medicinal help.

He was confined, recovering from the broken leg sustained on that fateful day, when exactly six weeks later, his phone rang.

The voice on the other side said, “Hello subscriber, welcome to the Africell Ramadan show. Astonished by the unique voice, Tejan woke his wife up with an ecstatic exclamation “Wake up. I have won!!!”

Unperturbed by that antic, his wife retorted with a shrug saying ‘’my head hurts, I want to sleep, but Tejan insisted she drew closer to share in the celebration.

As would any excited and lucky subscriber, Tejan had his phone in one hand, grabbed his wife with the other, squeezing her throat like a thirsty man in a desert would do a water sack for the last drop.

Excited but assertive, Tejan chose number 27, and as the nature of the game goes, every moon has a gift from Africell for lucky subscribers on the night. He won Le 500,000.

But that was just the introduction of what unfolded that night in full view of his doubting wife. Choose another number from the stars, the voice on the phone said. Still excited but assertive, he opted for 40. His life was about to be transformed by that penultimate choice. The presenter of the show, tried the key to the magic door containing the treasure chests, smoke effect in the studio was triggered, as was the chiming effect, indicating the key matched the magic door.

Like a scene from one of the Hollywood classics, the voice on the phone told Tejan, “You have accessed the magic door. You now have a chance to choose from the treasure chests labelled A, B and C.”

Without a blink he chose chest C, the lights went up, the drums rolled and rippled, and as fate would have it, the presenter announced, “Tejan, you are the proud winner of Le 50,000,000 from Africell – congratulations.”

Tejan stayed awake through the night, pinching himself to prove he was not dreaming or being pranked by someone.

Now imagine what he would do with that amount of money. The list would be endless. Priority number one would be, proper medical attention to mend his broken leg.

Well that’s how the leading telecommunications company in Sierra Leone, Africell can transform the fate of its subscriber. Who would have thought a man on crutches would win millions of Leones with Africell? The probability will almost be non-existent.

Fast forward to presentation day on Thursday 8th June 2017 where Tejan was handed the Le 50,000,000.00, by Africell, his wife a fish monger, (name withheld) served as testament to the account above.

She said, “He grabbed me so firmly, I had to break free from his grip to inquire why the sudden change in his mood after the phone call.”

His response was, “I have won. I told you I was going to win tonight.” He grabbed me by my hips but the urgency of nature beckoned and I had to respond.

Today, Tejan’s life has been transformed by Africell, he might be on crutches after the accident, but his pockets are no longer limping, thanks to Africell.