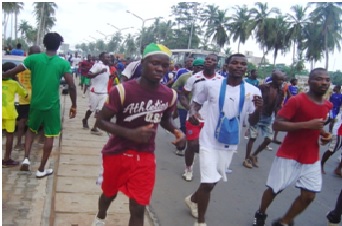 Speaking to AYV newspaper, Youth Street Ambassador, Alhaji Ibrahim Sorie Koroma who championed the exercise said the event was aimed to foster peace among young people from all political parties, tribes and religions and further discourage them from allowing them to be used and misused by bad and unpatriotic politicians to engage in violence before, during and after the general elections.

He recalled that young people have been used to create chaos in political rallies and meetings, especially at the peak of general elections.

With the awareness raising campaigns through peace jogging the ambassador went on, it is expected that the 2018 election will be free from violence perpetrated by youth.

He said the event will be held in all major districts and town in the country and that it attracts social youth clubs, street boys and girls and cliques operating across the country.

A participant at the jogging event, Joseph Kamara assured that those old dark days when politicians were providing alcohol and bad drugs for youth to cause mayhem are over.

“We will never again allow politicians to negatively brainwash us with narcotics and alcohol. We will positively contribute to the March 2018 elections and we will ensure that it is violence free.” Joseph assured.