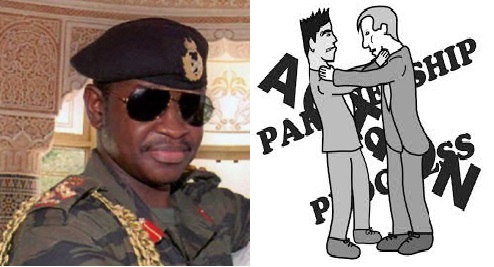 Since becoming the flag bearer, the SLPP wittingly or unwittingly have allowed Julius Maada Bio to hijack the party and hold it to ransom.

Without any scrutiny of his character, ideas and record, they made it easy for him to supplant the party’s governance, procedures and values.

He succeeded in shifting a party that was inclusive, towards a Mende/South Eastern hegemonic rhetoric, that does not address the daily concerns or aspirations of the poor and vulnerable and the country’s youths.

No wonder SLPP failed spectacularly in Freetown.  Even the good people of Kailahun (SLPP’s heartland) could not put their faith in the party, and instead preferred the devil they know.

Bio has created a party within a party.  PAOPA is not just a camp.  PAOPA is an existential threat to the SLPP. The party has buried its head in the sand and has failed to confront this threat.

Buoyed by the sense of impunity he enjoys within the party, Bio has demonstrated his contempt for the party he wants to lead in 2017, by supporting candidates opposed to the party’s own official candidates: pure political genius.

Furthermore, instead of opposing the present government which has spectacularly failed and is failing Sierra Leone, Bio has endorsed the APC as an example of effective leadership.

Since 2012, the SLPP stopped being the main opposition. The APC with their disastrous management of the economy, Ebola Virus Disease outbreak epidemic and many more ills, practically left the goal wide open.

It isn’t the case that the SLPP failed to convert opportunities into goals – the party were not on the pitch.

You can hardly find press releases, articles, motions in Parliament, demonstrations – all the stuff that main opposition parties which are preparing for governance would engage in, being actively pursued by the SLPP.

Rather, the party is wreaked with court cases brought against it by its own members, while a significant section was and still is pre-occupied with validity of the membership of one individual.

If toddlers in a kindergarten were organised into opposition parties, they will do a better job than the SLPP.

Instead of confronting the threat to the party’s survival, a huge song and dance has been made about the apparent disunity among flag bearer aspirants.  Aspirants are rivals for the main prize. It is a zero sum game.

Ugly things are usually said about each other during campaigning – it is politics.  The truth is, the apparent disunity among aspirant is a red herring.

As Jonathan Tengbe has pointed out, all but one of the aspirants have pledged to cooperate with each other and are cordial and comfortable with each other: all but Julius Maada Bio.

Hopefully the poor showing of the SLPP will cause those within the party, who have put their trust in Julius Maada Bio, to begin to do some soul searching and recognise the enemy within.

Hopefully, these results will make them wake up from Bio’s hypnotism.  Bio asserts that he is better placed to increase the SLPP vote share beyond 37%.

Given his unfettered access to campaign across the country, with the tacit support of the APC, his control of the party machinery through violent and surreptitious means; these results show that he is incapable of increasing the SLPP share of votes.

What is clear is that, if he is successful in winning the SLPP flag, the party faces oblivion. Will the real SLPP now stand up and become an effective opposition party?

There is still time for redemption. But the existential threat of ‘PAOPAISM’ must first be defeated.