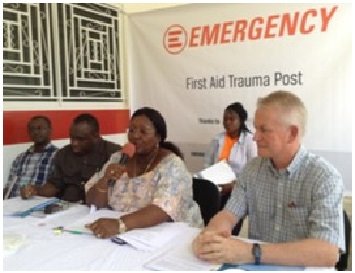 Madam Sia Koroma said that Emergency has been one of the best medical team that fought ebola as they were operating two centres in Freetown. “Whenever you talk about Emergency, people will tell you that they have been very instrumental in helping improve our health system in the country, because they have engaged in many difficult operations that have saved lives.”
The First Lady said according to the information she has received, Emergency has sent 75 Sierra Leoneans to Sudan out of their own expense for major heart surgery as they have one of the best heart hospitals in Africa.
Also, she said that Emergency has 387 national staff and 15 international staff that are working in their hospital and that Emergency has been operating in Sierra Leone since 2001 “Since they started operations in Sierra Leone, they have done 491,000 operations.”
She said we must be happy that they have opened another hospital in Lokomasama again, all treatment free and hoped that the people will make use of it and also protect it from destruction.
The Project Director of Emergency Sierra Leone, Dr Luca Rolla said he was happy that they are expanding in Sierra Leone and hoped that with more funding they will operate more health centres in the country.
“We started operations in Lokomasama on November 15 and we have treated 140 people, and the number will rise as many other villages around are getting the message.”
Luca also said that in 2014, they operated 4,031 people and treated about 20,000 children even at the height of ebola.
“I want to emphasize it again that Lokomasama health care unit is of high quality and treatment is free of charge; we are hoping that people around the vicinity will make use of this facility.”
The Project Director said on Friday night they had a major case and they transferred it to Goderich with their ambulance as he said that will be the case, and he averred that they are working 24/7 daily.
He thanked the European Union and his staff for all what they have done and also commended the First Lady for her passion in health care.
Dr Luca Rolla said by early next year they will open another health facility in Kissi Town, Waterloo, which will be the third in the country for now.
The Head of Delegation at the European Union, Amb. Peter Versteeg said he is happy that EU is sponsoring such a great project and said they will continue to work with the Health Ministry and other NGOs to improve healthcare in the country.
He said EU is sponsoring Emergency to run this project for the next three years, costing 2.1 million Euros. Amb. Versteeg said this project will be of immense benefit to that area and hope they will make good use of it.
“We will continue to further invest in the health care system as well as other areas in this post-ebola era and we hope we will have the First Lady to work with us as she did in making this Lokomasama project a reality.
Other speakers include the Port Loko District Chairmanl Munir Fofanah, the District Medical Officer, Dr. David Sesay and Paramount Chief of Lokomasama, Bai Marrow Angbathor II.
Deputy Health Minister I, Foday Sawi Lahai chaired the program.