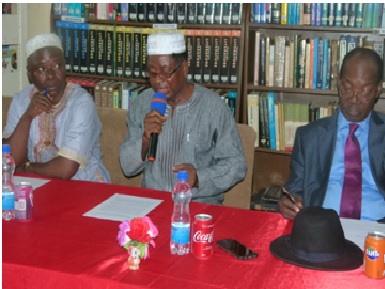 Mr. Turay opined that in support of the New Direction in the area of Free Quality Education, they have created a strong policy link between schools and public libraries nationwide as there are positive indications in the growing reading culture in the country. He noted that public libraries are the backbone for quality education because they give access to wide range of information resources and empowers pupils and students to become resourceful individuals.

Mr. Turay encouraged parents and caregivers with the relevant skills and knowledge to read to their kids, listen to them and encouraged them to the library. He expressed his hope to see an increase in the reading culture in all the twenty two libraries nationwide and thanked the Book Aid International and other partners in ensuring that we succeed in the flagship programme of the New Direction’s Free Quality Education in the Country.

Delivering his keynote address, Education Officer Freetown City Council, Rev. Joseph Cooper said that communication is a basic skill required to interact with fellow humans and to facilitate understanding when developing a society and every individual learns to communicate verbally, unfortunately not many get a chance for formal education. He said with the need to eradicate illiteracy in mind, the idea of celebrating an International Literacy Day was first discussed on September 1965, during the World Conference of Ministers of Education in Tehran, Iran. On October 26, 1966, the United Nations Educational Scientific and Cultural Organisation (UNESCO) gathered for the 14th general conference and proclaimed that September 8 will be celebrated as International Literacy Day.

Rev. Cooper noted that since 1967, International Literacy Day celebrations have taken place annually around the world to remind the public of the importance of literacy as a matter of dignity and human rights, and to advance the literacy agenda towards a more literate and sustainable society. He further said this has made effective connections between literacy and technical and vocational skills in policies, practice, systems and governance.

In his remarks, the Chairman Board of Director Professor Gbamanja stressed the need of focusing on youth and adults within the lifelong learning framework, with effective linkages between literacy and skills development to remove the bridge between the literacy, learning and skills development. He said that the International Literacy Day is a day to remind world leaders, influencers and the general public of the current status of adult literacy and learning which is a key to the right for all to an education.

Prof. Gbamanja urged the audience to use their networks to build awareness about illiteracy work to bring literacy education to those most in need as their voice is a valuable resource and useful way to contribute. He called on the Freetown City Council to support the monitoring aspect of the Sierra Leone Library Board for effective working atmosphere in all the 22 Libraries nationwide.

The program which was climaxed with reading, poem and experience sharing competition were also addressed by community leaders Mr. Abdul Zainu Kamara and George Kelfala.