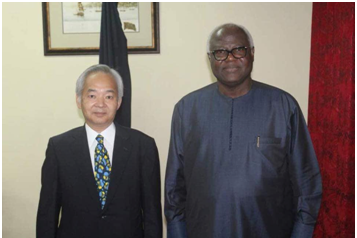 Making a brief statement, Mr. Yoshifumi said President Koroma has worked very hard in transforming the country and expressed profound appreciation for the increased bilateral relationship between the two countries during his tenure as president. He thanked President Koroma for the support provided to Japan and commended him for sustaining peace and stability during his reign.

In his response, President Koroma stated that Sierra Leone and Japan have had excellent ties over the years and have supported each other in times of need. He acknowledged Japanese support in agriculture, energy, water, and building the country’s human resource base. President Koroma noted that now that the country has attained high level of peace and stability, he called for continued Japanese support towards Sierra Leone’s quest to attain middle income status, and improve access to energy, agricultural productivity, building the country’s human resource among others.

He pointed out that Africa and the G4 nations should continue to engage and effect reforms in the United Nations Security Council.