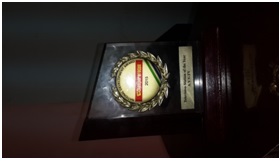 This prestigious end of year award was bagged at the Diaspora Focus national development award ceremony. On the same occasion, the Station Manager of the AYV Radio, Mamaja Jalloh, popularly known as D.J Base was also awarded as undoubtedly the Best D.J of the year.

“What better way to end a very hectic but fruitful year at the AYV Media Empire. Of course these awards did not come as a surprise, taking into consideration the huge media investment undertaken by our able youthful president Ambassador Navo, backed by the quality of programmes that are being aired on radio, screened on television and published on newspaper,” AYV’s Communications and Public Relations Chief, Abdul Fonti commented.

“The AYV Media Empire is used to these types of awards as we have received several awards of excellence in the past from credible institutions,” Deputy Station Manager of the AYV Radio, Diana Coker disclosed.

With the events unfolding at the AYV Media Empire, it will further not surprise the world of more awards to the credit of AYV in the coming days, months and years.