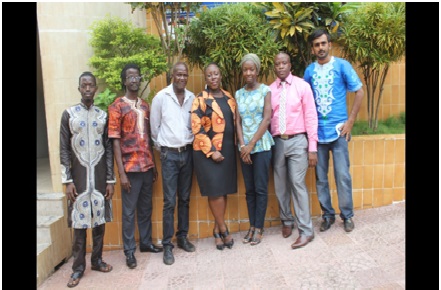 According to the CEO of the Impact Hub Fellowship Social Innovation, Madlene Hamilton, they are interested in young entrepreneurs who started businesses that exist and would like them to grow. She noted that those who have social impact, create jobs and those who promote social goods with profit making orientation and should not be engaged in non- governmental organizations.

She said that the day of the award ceremony was the final day of the five man committee fellowship program that they have been running to help identify a few stand out entrepreneurs in Sierra Leone. She recounted that at the start of the program, they had thirty six applicants who submitted application forms to hub. The applicants put their ideas to a jury and out of the thirty six; six were selected for the incubation program.

In the incubation program, they were paired with mentors and coaches and those coaches help them refine their business plane, strengthen their foundations pitched their ideas to another set of judges and the judges came to a consensus on who the winning fellow is and also selected two finalist who will receive funding from impact hub.

From the consensus of the Judges, Alitta Ansu-Katta of the Office and Domestic Support Services Agency Recruitment and Training Centre emerged as the second winner, Joseph Kamara of Singsong Medical Services emerged third winner and David Dumbuya a logical shoemaker emerged as the first winner and he was given ninety three million Leones by impact hub.

David Dumbuya a logical shoemaker and the winner of the ninety three million Leones Impact Hub Award Winner expressed how happy he was and that his dreams have finally come to reality. He said that for a long time he has been praying for help and searching for money to see how he can start his own business.

He added that he started the business of shoemaking over thirty years ago and he had always wanted to start his own business so that he can create job opportunity for young people. He said that he can make boots for soldiers, the police and other kind of shoes and that he would like to tell the government that the idea of importing shoes from other countries will soon expire. He encouraged young people to learn something instead of involving themselves in other unlawful things, and that to learn a skill or trade is the best.