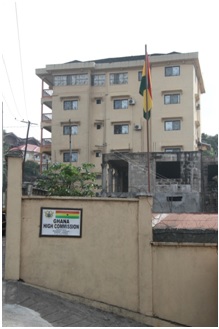 The High Commissioner stated over the weekend, at a reception at his Hill Station residence on the commemoration of Ghana’s 61st Independence anniversary that Joseph Casely Hayford was one of the founders of the Aborigines Rights Protection Society in the then Gold Coast. He added that the above-mentioned individual established the first Ghanaian nationalist organization.

He went on to inform Journalists that together with others, they founded in 1920 the National Congress of British West Africa, which brought together nationalists from the British colonies of The Gambia, Nigeria, Gold Coast (now Ghana) and Sierra Leone, to work together towards securing the liberation of the respective countries from colonial rule studied in Sierra Leone.

He added that the like of Wallace Akunor Johnson, the famous Sierra Leonean journalist, who lived and worked in the Gold Coast in the 1930s, was also one of the luminaries in the said organization.

“The strong relations between our two nations have survived the post-independence era of our two nations and the past three decades, in particular, Ghana has sought to strengthen the bonds of friendship and cooperation. It is in this vein that soon after Sierra Leone’s civil war in 2002, Ghanaian troops were deployed to help consolidate the peace and stability in the country,” the Ambassador noted.

In 2014, the Ghanaian envoy recalled, “When Sierra Leone was plagued by the ebola virus disease, our former President H.E. John Dramani Mahama, the then Chairman of the Economic Community of West African States (ECOWAS), embarked on a brave mission to Freetown to identify with the country and express the concerns, not only of the Ghanaian people, but the entire ECOWAS sub-region.”

Speaking about the Independence, the High Commissioner explained that Independence Day celebrations are indeed memorable everywhere and marks the epoch in the history of the country. For Ghana, he said, “It represents our determination 61 years ago as the first country in Sub Saharan Africa to free ourselves from colonial rule, to move on through self-rule to prosperity and development.”

“As we relish the significance of this period, Ghana is set on a path of progress and development.” Adding, “there is a lot ongoing and the quest of Government is to gradually move the country, beyond aid to trade and disengage from the mindset of dependency on handouts and charity which indeed is unsustainable.”

Thus, there is currently a paradigm shift in our national discourse and engagement and a determined effort to grow the economy effectively mobilize local resources and unleash the full potential of our people, particularly the youth, towards realization of their dreams and aspirations, he said.