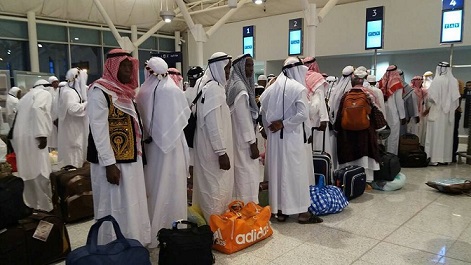 This is according to a press release from the Ministry of Social Welfare, Gender and Children’s Affairs.

The release stated further that on Saturday 8th September, 2018, the second batch of pilgrims will arrive at the Lungi International Airport at 10:30pm and they will also be conveyed to the Siaka Stevens Stadium where their relatives will collect them at 7:00am on Sunday 9th September, 2018.

It could be recalled that a total of eight hundred and twenty eight pilgrims left for the holy land of Mecca in the Kingdom of Saudi Arabia.

Meanwhile, the Ministry of Social Welfare, Gender and Children’s Affairs extended thanks to members of the general public, especially relatives of the pilgrims for their support to the Ministry and the Hajj Committee for the successful completion of the 2018 Hajj.

AYV television Channel 33 will be giving exclusive coverage of the events of today and tomorrow from the airport through Port Loko on to the Siaka Stevens stadium.