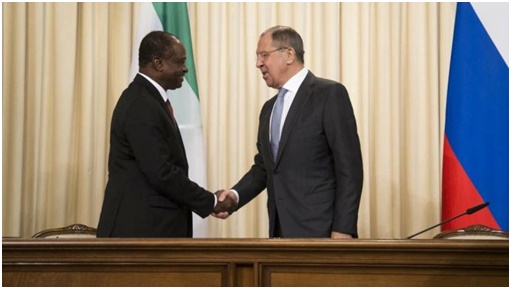 The talks with my colleague, Sierra Leone’s Minister of Foreign Affairs and International Cooperation Samura Kamara took place in a good and constructive atmosphere and were fairly substantial.

We discussed the status of our bilateral relations and reaffirmed the positive and close character of our political dialogue, with an emphasis on the trade and economic component that lags behind our political ties.

We stated that Russian companies have already started working in Sierra Leone. The project on developing a bauxite deposit is fairly successful and we have specific prospects in diamond mining. We have a valid intergovernmental agreement between Russia and Sierra Leone on fishing and the protection of sea resources. That said, we would certainly like to look for additional areas of cooperation. In this context we mentioned the energy sphere, military-technical cooperation, healthcare and education. We provide several scholarships for our friends in Sierra Leone each year. We would like to continue this practice and feel reciprocal interest in it.

We agreed to render the necessary aid to the business circles of our countries in establishing contacts, which, naturally, will help them find mutually beneficial projects in many diverse areas.

We agreed to accelerate the approval of several intergovernmental agreements on which we are now working, including those on countering drug trafficking, developing contact between law enforcement agencies and providing mutual legal assistance.

We also reviewed international issues. Our positions are close and often coincide on the majority of issues. We are maintaining sound cooperation in the United Nations, where the African countries are playing an increasingly active role in key areas of focus. We are supporting this trend in every possible way.

Sierra Leone chairs the African Union Committee of Ten Heads of State and Government that was established to promote the position of African countries at the talks on UN Security Council reform. We discussed the related issues. We share the opinion that the developing nations, including, of course, the African states, should be represented on a larger scale in the main body on maintaining international peace and security. Our friends from Sierra Leone highly value Russia’s position on this issue. We are grateful for this and will consistently promote it at future talks.

We talked about the situation in Africa in terms of efforts to settle the numerous conflicts there. We would like the international community to provide all-round assistance to the Africans in their search for solutions to crises in the Horn of Africa, South Sudan, the Sahara-Sahel region and the Great Lakes region. We believe that political and diplomatic solutions must be found for all these problems based on international law and a broad national dialogue. We welcome the policy of Sierra Leone that is aimed at promoting the African countries’ work for peace and stability in Africa.

For our part, we updated our colleagues on Russia’s assistance to the African countries, including the considerable efforts to ease their debt burden, promote the debt-for-development programmes, and provide tangible official assistance through various UN funds and special agencies. We also provide assistance in education, including the training of African police and peacekeeping forces, and are cooperating with Africa to deal with the Ebola virus. In particular, we have provided such assistance to Guinea and Sierra Leone, where special facilities have been established to create a universal Ebola virus vaccine.

We agreed on the need to fight security challenges more actively, primarily international terrorism, extremism and piracy. We have formalised our plans to further develop our foreign policy cooperation in the memorandum of understanding on consultations between the Russian Foreign Ministry and the Ministry of Foreign Affairs and International Cooperation of the Republic of Sierra Leone.

We are satisfied with the results of these talks, which have confirmed our mutual resolve to consistently strengthen relations between our countries.

I am grateful to my colleague, the Sierra Leone Minister of Foreign Affairs and International Cooperation, Samura Kamara, for these productive talks.

*Question:* CIA Director Mike Pompeo claimed that Russia has been interfering in the US elections for more than eight years now. At a security conference held in Colorado on Thursday, answering a question about Russia’s interference in the 2016 elections, he said that he had already said a thousand times that Russia had interfered with US elections before.

*Sergey Lavrov:* If this statement means that we interfered in the US elections in 2008 and 2012, then President Obama owes his victories to us. I’ll leave that without comment. I believe this is already beyond the boundaries of what’s reasonable.

It’s good that you mentioned the interview by Mr Pompeo. He (at least that’s what I read) said that the United States and Russia pursue different goals in Syria. His answer to a follow-up question was that Russia’s goal is to obtain a warm-water port in the Mediterranean. First, it’s good that they reminded everyone that this is a warm-water port. Second, at about the same time I read that the United States was operating 10 bases in Syria. In the grand scheme of things, Mr Pompeo wants the same thing in Syria as we want, only several times over. Another big difference is the fact that we do not hide our two bases from anyone. They were built there and operate under intergovernmental agreements. Their purpose is to provide assistance in the fight against terrorists, of which there are many. The United States does not publicise its bases, and the fact that these bases are illegal is also clear, I believe, to everyone.

Nonetheless, I have always believed that not only do we share goals with the United States with regard to what I just said, but also with regard to the key tasks facing the international community as they relate to the Syria crisis. This includes fighting terrorism, eradicating ISIS, Jabhat al-Nusra and their offshoots in Syria, the implementation of political settlement agreements based on UN Security Council Resolution 2254, which clearly states that only the Syrian people can decide their own future. It would be sad if these goals, for some reason, no longer sit well with Mr Pompeo. I would rather prefer that all the participants in the settlement process and efforts to fight terror in Syria, including diplomats, military, special services and intelligence agencies, concentrate on the tasks approved by consensus by the UN Security Council.

*Question:* What is the status of Russia-US talks delineating the borders of the southern de-escalation zone in Syria today? Are there plans to expand this zone or increase their number?

*Sergey Lavrov:* The experience of creating the southern de-escalation zone with the participation of Russia, the United States and Jordan, which is being implemented literally before our eyes, is, I believe, the best corroboration of the fact that when we engage in concrete action, rather than speculation, we can achieve good results. The process of creating this zone continues, and the main parameters have already been discussed. We are now discussing the specifics of its functioning to ensure monitoring of compliance with the cessation of hostilities between government forces and the armed opposition in order to ensure unfettered humanitarian access and, in general, the movement of civilians in and out of this zone.

I think this work will be finished in the near future.

© The Ministry of Foreign Affairs of the Russian Federation