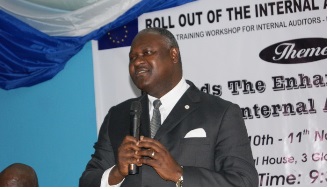 A year in office, President Koroma was to enact the strongest legislation in the sub region, giving complete prosecutorial powers to the anti graft commission. First to handle this prodigious task, as Commissioner, was Abdul Tejan-Cole.  He, in my view, left an ineradicable mark in our history of addressing graft.  He successfully prosecuted individuals making the commission virtually a major player in state governance. Thanks to the political will provided by the Government and particularly by the President.

Next was Joseph Fitzgerald Kamara (JFK). An outstanding lawyer by profession, JFK was, prior to taking up the appointment at ACC, Deputy Prosecutor of the Special Court for Sierra Leone. Before that he was Senior Trial Attorney for the Civil Defence Forces trial Prosecution team. At the SCSL, he made his mark.

His days at the ACC were also successful; paying special attention to key governance issues, like decentralizing the office, eventually ensuring the level of awareness amongst the public about what corruption is, reached a high crescendo. He never underrated the prosecutorial aspect as people wanted to see that there was an effect in the area of prosecution, and there was punishment for being corrupt. During his tenure at the commission, we saw a heightened level of jurisprudence in terms of corruption cases.

His days at the commission helped ensure an informed public perception of him and the commission. His reappointment as commissioner for the Anti-Corruption Commission in 2015 was a testament to his success, and was further indicative of the confidence the President may have maintained in him.  He was, early this year, to be nominated for the job of Attorney-General and Minister of Justice by the President

He has built a track record of honesty, with a strong sense to duty and, above all, commitment to maintaining a high sense of integrity. He has got a decent, admirable and a well cherished pedigree over the years that could not be easily dented just over night.

Be it for political gains, or an attempt to divert his sense of duty and commitment to working  staggeringly in meeting the expectations of the President, dragging his name closer to the ‘Panama Leaks’ makes a complete ridicule of whatever purpose one may have.

Recent social media insinuations of him being named in the much globally talked about ‘Panama Leaks’ are completely ridiculous, out rightly fabricated and childishly presented for public consumption.  My conclusion is based on this premise: considering his previous job at the ACC, having studiously pursued serious prosecutions of even friends, there would never come a time for him to have thought of having an offshore account. Never, in my view!

JFK was himself aware of what it meant, heading such a commission and what would be general public expectations when he spoke in a 2014 interview with me of the challenges by virtue of the nature of this job. “…this job like many others, the top is always lonely. It is lonelier in this particularly job because you’ve got to investigate friends and Sierra Leone being a small country, you create enemies in the process especially if you are a bold Commissioner.”

Since his appointment as A-G/Justice Minister, JFK has remained focused on promoting the President’s vision of accessing justice for all and has assured of remaining “unshakable” in that pursuit.  Life, within and beyond the political platter should not ignore those key success features of integrity, trust and public confidence. These, I am certain, have always been held by JFK. He could never have forsaken them for want of an offshore account.