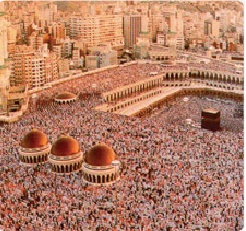 The Head of Central Hajj Committee and Governor of Mecca, Prince Khaled Alfaisal, blamed the stampede on some pilgrims from African nationalities. The Prince later ordered an investigation into the incident. Pilgrims from Nigeria, Niger, Chad and Senegal were also among the causalities.

There were over two million Muslims from across the world who had gathered in Saudi Arabia’s Makkah Province for the annual Hajj pilgrimage.

The External Affairs Minister, Sushma Swarajj, on 25th September last year informed that 14 Indians were injured and 13 hospitalized. Report from Pakistan maintained that 6 of its nationals including two women were among those killed in Mina.

Information claimed that 3 Indonesians and 1 Turkish national were among the dead while Sudan lost 1 of its nationals and two were injured. Most of those crushed were elderly. The latest figure of death toll stood at 717 while 863 others were injured.

The Governor of Mecca, Prince Khaled Al-faisal blamed the Africa nationals for the stampede. A report citing that Hajj pilgrims pointed fingers on the volunteers as they were too inexperienced to handle the crowd. A Hajj pilgrim said that the volunteers responsible for managing the crowd were not even aware about the roads around Mina while another stated that none of them were trained to handle such large multilingual crowd.

The Kingdom of Saudi Arabia is the custodian of the two holy places, Mecca and Madina has been blamed for the deadly stampede in which 717 Hajj pilgrims lost their lives and nearly 863 were injured in one of the worst accident in Mecca in the last twenty five years.

Many eye witnessed and stampede survivors squarely accused the Saudi’s of mismanagement. The crush happened in Mina, a large valley about 5 kilometers from the holy city.