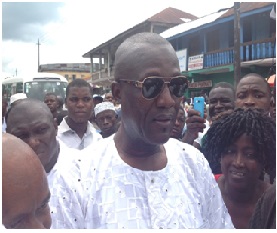 HE. Dr. Ernest Bai Koroma for the presidential ticket of the ruling All People’s Congress (APC) in the forthcoming presidential election, following his impeccable leadership qualities which include humility, tolerance, among others.

Moseray Fadika is the only flagbearer aspirant of the APC that is reported to have  demonstrated the meaning of the adage which says “paying respect to others for their greatness is a way of paving your own way to greatness”. The aforementioned assertion is one that describes the personality of Moseray Fadika. His welcome treat for the President on his return from India shows humility, love and respect for leadership.

Moseray Fadika is a household name when it comes to philanthropic work and dealing with young people; empowering the young with scholarships and creating jobs.

His association with the youth is described by many political pundits as immaculate. He has been recognized both nationally and globally for his skills in entrepreneurship. Recently in Lunsar, the children awarded him the “Hero’s Award” crowning him the living hero of our time who should be given the opportunity to help rebuild the country’s economy in the forthcoming election.

Moseray Fadika has made it possible for every corner of Sierra Leone to benefit from his philanthropic work. The educational sector has been evidently transformed with the support of Moseray Fadika by rebuilding dilapidated schools and university structures and the supply of educational materials including furniture, lab equipment, computers and books amongst others.

As a result, a good number of the young generation of the country have reportedly decided to give their unflinching support to Moseray Fadika whom they refer to as the “best after the best”. Others refer to him as the next ‘world best.’