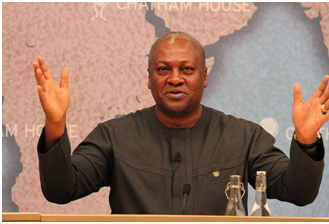 He was speaking at a ceremony where all presidential candidates signed a peace document tilted: The Freetown Declaration at Radisson Blu Hotel -Aberdeen in Freetown.

According to him, the March 7th elections are truly critical to Sierra Leone’s democratic advancement because it affords Sierra Leoneans the opportunity not only to elect a leader but also to consolidate the peace in the country. He added that no amount of political power could equate to the shedding of the single drop of blood of any Sierra Leonean during election.

President Mahama said he feels assured that Sierra Leoneans and the respective presidential candidates are determined to pursue a path of democratic consolidation and would ensure that violence or conflict is never an option for resolving any difference.

“Upon my arrival in the country, I have held a series of consultations with all sixteen political parties and stakeholders; CSOs and was convinced that there is a great desire and resolve among all stakeholders for the conduct of an election that is incident-free and one that meets internationally accepted standard and one that is transparent, free and fair.

All sixteen presidential candidates were present to append their signature to a peace pledge in agreement that they would uphold peace throughout the entire electoral process.

He advised all the presidential candidates to approach all the processes involved in the elections in a spirit of peace and without resorting to violence.

He said the example in Ghana resulted to evidence of democratic consolidation for more than two decades in Ghana which manifest into steady economic expansion and speedier reduction of hunger and poverty among the people than at any other comparable period in Ghana’s post independence history.

He went on to say that Sierra Leone has a similar potential and can develop with its significant natural resources and innovative people when violence in all its form is eschewed by politicians and their supporters, adding that he has no doubt that Sierra Leone can conduct peaceful and credible elections.

“Sierra Leoneans are responsible to maintain the peace in the country and the declaration is one step forward in the right direction democratic direction,” he said.

According to him, NEC officials should be politically neutral because the country comes first and so electoral officers must be seen to be non partisan while political party representatives at the polls must conduct themselves in a manner to guarantee a peaceful poll.