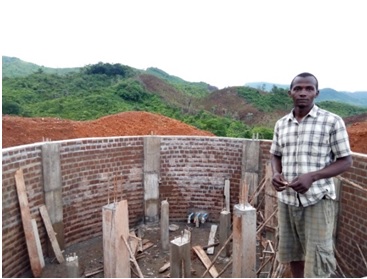 It was granted a large scale Mining License (ML 01/2018) in January, 2018. The dam which is at its completion stage will provide pure water for more than one thousand inhabitants in Mansumbirie, Kalmaron Kholifa and Maranda villages.

Monitoring the ongoing construction, Deputy Youth Leader of Mansumbirie, Yayah B. Kargbo urged the engineers to speedily complete the project and be officially handed over to the Town Chief on behalf of the people.

Yayah frowned at the delay but encouraged them to do a quality and sustainable job that will benefit generations yet unborn. He said for far too long people in those parts of the country have been deprived of pure drinking water, adding that the flowing stream has been their major source of drinking, laundering and other domestic works that require water.

The project, after completion will amount to hundreds of thousands of United States dollars.

The Company’s Managing Director, Yang ChongQiu said they are working to strongly support the president’s New Direction drive to ensure availability and sustainable management of water and sanitation for all.

“We are here to stay considering the age old bilateral relationship between China and Sierra Leone,” he told journalists, adding; “we believe the locals are part of us and therefore always ready to provide a better facility almost similar to those in the capital city.”

Mr. Yang said they are speedily trying to handover the facility to the people as safe drinking water and hygienic toilets protect people from disease whilst enabling societies to be more productive economically. He said the Government of Sierra Leone cannot do it alone, stating: “This is why we are complementing its efforts as best as we can.”