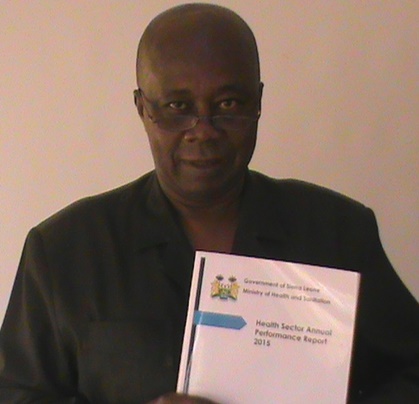 He congratulated the leadership of the Directorate of Policy, Planning and Information and team for driving the process, and assured his staff and partners that the process will continue to ensure they serve as invaluable reference materials for all within and outside Sierra Leone.

He reiterated the process made in 2015 and in the first-half of 2016 as a team, and reminded health officials about the importance to examine the Ministry’s achievements, the challenges and agree on modalities of making the remaining half of 2016 better. In making their contribution during the period under review, Dr. Kargbo noted that as stakeholders in the process they have the opportunity to show case the successes in the reporting period, the damages caused by the Ebola virus diseases to the country and the health sector.

The Chief Medical Officer noted the robust recovery plan which gained admiration by donors, sustained community engagements to restore the last confidence of our people on the health sector, and the range of demand-driven measures initiated which resulted to increase utilization of our health services, and above all continue to improve better and mutually respectable working relationship promoted with their partners. These approaches, Dr. Kargbo said were indeed critical as part of efforts to recover from the damages of Ebola and to overhaul the health system.

Commenting on the implementation of the Ebola Recovery Plan, Dr. Kargbo said it is with pride to say that the plan was successful despite of some few challenges and concerns, adding that they must take the success story as a Ministry and stakeholders, that the Early Recovery Plan was able to achieve most of the targeted deliverables.

He said he is optimistic that more effort would be made to ensure the 10-24 months Recovery Plan and the wider sector plans succeed.

The Chief Medical Officer on behalf of the Minister commended the facility staff and all for the hard work, hoping that the trend will continue towards building a resilient health system country wide.

The Director of Policy, Planning and Information, Dr. Samuel Kargbo described the production of the report as an annual tradition and a reflection of what they implement in the various districts towards improving the health outcomes.

He expressed appreciation over the response and participation as it would go a long way in achieving the desired goal and objectives.

Making her remarks, Acting Coordinator Health Systems Strengthening WHO Country Office, Sowmya Rapandale described the event as an opportunity to take stock and work on the reviewed process, and reiterated her organization’s continued support towards the development of the health sector in the country.

The Health Advisor, USAID, El-Din Hassan noted the enormous services rendered, pointing out that the event calls for the Ministry and stakeholders to reflect on their past activities, policy and guidelines to be credibly translated into action.