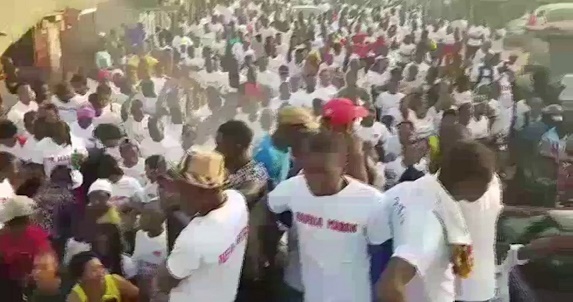 The headquarter city of Bombali District, Makeni, was thrilled by the called of youths in the early hours on Sunday, as they paraded the city with loudspeakers on trucks, with megaphones, riding on motorbikes calling on their peers to come out in favour of their party’s chosen one. The youths tagged Dr. Marah as the one they see as a true ambassador and the candidate that will deliver their established hopes and aspirations.

A leading youth activist in the northern district of Sierra Leone, Bombali, Isatu Turay submitted that “Dr. Marah is the only candidate that will foster development in the nation… Sierra Leoneans are yearning for development, youths and women’s empowerment, a booming economy that will foster employment and quality standard of living. In order to realize the dream of President Koroma, which is to transform Sierra Leone from a developing to a middle income nation” Dr. Marah is the key to Sierra Leone success, she landed.

The youths endorsed and declared Dr. Marah as the nation’s choice and the next world best in the country. He was referred to as the classless man and the poor man friend that always accessible to all and sundry.

Throughout the rally the youth consistently applauded President Dr. Ernest Bai Koroma and called upon him to support Dr. Marah to be his successor.