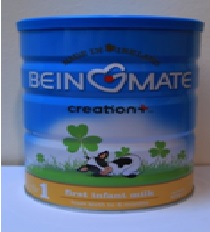 Speaking during the donation, Mariatu Kargbo stated that the donation is timely because it came during the time when the country had come out of the mudslide that left hundreds of children and babies without parent.

She said the Beingmate has been in existence for over twenty-five years and as a goodwill Ambassador, she taught it fit that the dry tin milk is for the less privileged babies and therefore educate mothers on how to use it.

Madam Kargbo continued that the milk is for babies between the ages of 0-6 month and 6- 1 year old, noting that due to the active role played by the First Lady of Sierra Leone together with her, the Milk was brought to Sierra Leone.

Nurse Eugenia Metzger from Office of the First Lady stated that the donated milk will help the babies to grow up well and also build the immune system of the babies, more especially for mothers that have dry breasts.

She therefore thanked Mariatu for her goodwill and shower praises on her for the timely donation.

Street Ambassador, Sheik said Mariatu has a good heart, thinking about the less privileged  is a big  blessing and therefore called on other Sierra Leoneans based in other countries to follow the footstep of Madam Kargbo in bringing good gestures to the country.

One of the beneficiary, a mother of triplet babies, Kadiatu Kamara thanked Beingmate and also madam Kargbo for her good gesture, adding that the donation came at the right time because as a triplet mother she has been facing struggles on how to breast feed her three daughters at the same.

Frank Wang Manager of Beingmate Company accompany by his deputy Jim Zhang said the Company was established by Mr Hong XIE, in 1992, in Hangzhou, Zhejiang Province.

Their business involved in production, R&D, sales and many related fields of infant and maternal food and supplies, service with a brand value of more than CNY 5,000,000,000.

“The independent production lines of infant food include three categories of milk substitutes, weaning foods and dietary supplements of more than 200 varieties in total. They are specially developed for Chinese babies and are more suitable for their fitness.”

During the past 19 years, he said the three unique programs in Company Social Responsibility (CSR) have been successfully set up, namely “loving baby”, “Baby raising” and “Loving Mum”, provided services for the Chinese baby and benefit their health from many aspects such as childbirth, how-to-raise children and education guides.

Mothers of street life family were pleased with such donation, they described it as very timely and call for more.